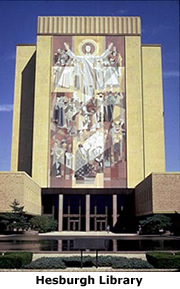 The University Libraries of Notre Dame have been renamed the Hesburgh Libraries, in honor of Rev. Theodore M. Hesburgh, C.S.C., president emeritus of the University.

Renaming the entire University Libraries system after Father Ted is an appropriate way to honor the depth and breadth of his vision for interdisciplinary excellence at Notre Dame,said Rev. John I. Jenkins, C.S.C., the Universitys president.Now, the Hesburgh Librariesinclude not only the monument to learning called the Hesburgh Library, but also the various subject-specific libraries that bring world-class resources and expertise to faculty and students all around campus.

The Universitys principal, 14-story library was designed and constructed under Father Hesburghs leadership in the 1960s and has borne his name since his retirement in 1987. His name now also will apply to the other 10 libraries within the campus system, which, along with the main facility, contain a total of nearly 3 million volumes, more than 5,850 electronic titles, more than 3 million microform units and 25,200 audio-visual items. The libraries subscribe to approximately 12,100 serials and are managed by a faculty of 50 and a staff of 145.

Of the new Hesburgh Libraries, Father Jenkins also said:They, like Hesburgh the priest, will help us to educate minds and hearts with a great sense of community that bridges past, present and future.

Considered one of the most influential figures in higher education in the 20th century, Father Hesburgh, now 90 years old, led the University from 1952 to 1987. Among his many honors, his public service career was recognized in 2000 when he became the first person from higher education to be awarded the Congressional Gold Medal. He also received the Medal of Freedom, the nation’s highest civilian honor, from President Lyndon Johnson in 1964.