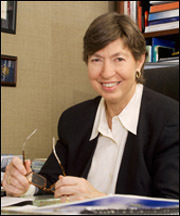 The Graduate School ceremony will take place at 10 a.m. in the Joyce Center. An outdoor reception for graduates and their guests will immediately follow the ceremony in the area adjacent to the DeBartolo Performing Arts Center.

Fox, who also serves as a Notre Dame Trustee, was named the seventh chancellor of UCSD in 2004 by the University of California Board of Regents. Previously, she was chancellor and distinguished university professor of chemistry at North Carolina State University. Before going to North Carolina State, she spent 22 years at the University of Texas, where she advanced from assistant professor of organic chemistry to vice president for research and holder of the Waggoner Regents Chair in Chemistry.

Fox is the author of 350 research publications, five books and 29 contributed book chapters and serves on the Presidents Council of Advisers on Science and Technology. She is an elected member of the National Academy of Sciences, the American Philosophical Society and the American Academy of Arts and Sciences, and is a fellow of the American Association for the Advancement of Science.

Fox has received numerous awards, including the Charles Lathrop Parsons Award for 2005 from the American Chemical Society in recognition of outstanding public service, as well as the Monie Ferst Award, a national award recognizing outstanding mentoring of graduate students.

This year marks the second time that Notre Dame has conducted a distinct ceremony for Graduate School students who have earned masters and doctoral degrees.

The Commencement ceremony will include recognition of all graduates and the recipients of the Shaheen Awards, the Graduate Schools highest student distinction, and the recipient of the Distinguished Graduate Alumnus Award. The Rev. James A. Burns, C.S.C, Graduate School Award, presented to a faculty member for outstanding contributions to graduate education, also will be presented during the event.