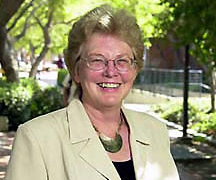 N. Katherine Hayles, professor of English at UCLA, will be the featured speaker in the University of Notre Dame’s annual Ward-Phillips Lecture Series, taking place on campus this month.

Hayles will deliver three lectures March 29 to 31 (Wednesday to Friday) in Room 210-214 of Notre Dame’s McKenna Hall. All talks begin at4:30 p.m.and are free and open to the public.

One of the world’s leading scholars on electronic literature and postmodernism, Hayles is the author of numerous books, most recently “My Mother Was a Computer: Digital Subjects and Literary Texts,” and more than 30 essays that have appeared in such journals as Contemporary Literature, Modern Fiction Studies, Critical Inquiry, American Literature, The Visual Culture Reader and PMLA, in which she has mapped out a wide range of interlocking interests on contemporary visual media, literature, science, poststructuralism and postmodernity.

Established in 1966, the Ward-Phillips Lectures honor the late Rev. Leo L. Ward, C.S.C., and Charles Phillips, both distinguished former professors of English at Notre Dame. The series is sponsored by Notre Dame’s College of Arts and Letters; Institute for Scholarship in the Liberal Arts; Henkels Lecture Series; Graduate School; Department of English; Department of Film, Television and Theatre; Program in History and Philosophy of Science; Hesburgh Library; and Center for Creative Computing. *
*