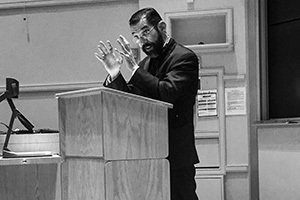 More than 250 writers, artists and lovers of literature convened at the University of Notre Dame June 22-24 for “Trying to Say God: Re-enchanting the Catholic Literary Imagination.” This inaugural conference aimed to query the nature and role of contemporary Catholic literature and encourage writers of all genres whose work contains religious themes and concerns.

Elie’s article inspired major responses from a number of writers, including Dana Gioia, poet and former chairman of the National Endowment for the Arts; Gregory Wolfe, editor of Image Journal; and Kaya Oakes, journalist, author and writing teacher at University of California, Berkeley.

In a spirit of continuing of this conversation, and with some of the major respondents present, “Trying to Say God” gathered nationally acclaimed novelists, poets and essayists, as well as publishing professionals and readers. This three-day community-building effort included a performance by Notre Dame Vocale that featured works by James MacMillan, Arvo Pärt, Josquin Desprez and Francisco Guerrero. Artistic director Carmen-Helena Téllez, also a professor in Notre Dame’s Department of Music, leads this group.

The Most Rev. Daniel E. Flores, bishop of Brownsville, Texas, offered a meditation on faith and writing in his opening keynote lecture. Flores connected the love of the Word made flesh in Christ and the challenge of translating that love through words on a page. He said, “Every individual human life is a word that agonizes in the act of being spoken.”

Bestselling memoirist and poet Mary Karr described her conversion to Catholicism during the lowest phase of her alcoholism and added, “I think the secret to writing about God is the same as the secret to finding God — it means reaching down to the most broken parts within ourselves.”

Valerie Sayers, William R. Kenan Jr. Professor of English at Notre Dame, gave a talk on research she conducted for her most recent novel, “The Powers.” In the novel, Sayers explores pacifism against the backdrop of Joe DiMaggio’s hitting streak in 1941 — two years after the MS St. Louis docked in New York harbor with 1,100 Jewish refugees who were denied entry to the U.S.

“Trying to Say God” is the first in a series of biennial conferences. The gathering was organized by Kenneth Garcia, associate director of Notre Dame’s Institute for Scholarship in the Liberal Arts; David Griffith, director of creative writing at Interlochen Center for the Arts in Michigan; Sam Rocha, assistant professor of philosophy of education at the University of British Columbia; and Jessica Mesman Griffith and Jonathan Ryan, both of the Patheos blog “Sick Pilgrim.” The 2019 conference will be held at St. Michael’s College at the University of Toronto and will return to Notre Dame in 2021.