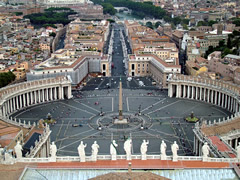 The conference is titledContribution of Catholic Universities to the Church and Cultureand will include addresses by Bishop Fisichella, Notre Dame President Rev. John I. Jenkins, C.S.C., and the Most Rev. Daniel Jenky, C.S.C., bishop ofPeoria,Ill., and a Notre Dame Trustee.

The five-day trip also will include visits with keyVaticanleaders in papal congregational offices and pontifical councils that closely relate to Notre Dames mission. The Boards visit takes place only nine months after the election last April of Pope Benedict XVI.

As the worlds most prominent Catholic university, we will have the chance to foster positive relationships with those who assist in leading the Church,said Patrick McCartan, chair of the Board of Trustees.

Father Jenkins added:As leaders of Notre Dame, it is important that we see ourselves as part of and in service to the Church. This visit is first and foremost a pilgrimage that will allow our Trustees to explore and deepen that commitment.

The Board will conduct its regular business meetings Jan. 31 and Feb. 1 (Tuesday and Wednesday). The academic convocation follows the end of those sessions. Bishop Fisichella is to address the topic,The Role of theRomanUniversities.Father Jenkinsaddress is titledNotre Dame: A Catholic University within American Academe.Bishop Jenky will discussThe Congregation of Holy Cross and Catholic Education.

In 2001, Pope John Paul II appointed Bishop Fisichella rector of thePontificalLateranUniversityand president of the Pontifical John Paul II Institute for Studies on Marriage and Family. He is considered a thoughtful, articulate spokesperson for Catholic views, especially on matters of public policy. A primary contributor to John Paul IIs 1998 encyclicalFides et Ratio(Faith and Reason), he is an advocate of the need to defend Christian identity against the forces of modern culture.

Bishop Fisichella was ordained a priest in March 1976 and ordained as an auxiliary bishop in September 1998. He is a member of the Vatican Congregation for the Doctrine of the Faith and the Congregation for the Causes of Saints. He holds undergraduate and graduate degrees from thePontificalGregorianUniversityinRome, where he served as a member of the fundamental theology faculty from 1981 to 2001. He has written 18 books and published several hundred articles.

Bishop Fisichella visited Notre Dame last June to address a bishops conference titledDei Verbum: the Word of God in the Life of the Bishop.

Last November, Rooney became the seventhU.S.ambassador to the Holy See since full diplomatic relations were established in 1984. Rooney and his wife, Kathleen, have been active in Catholic, political and civic circles at the national level and in bothTulsa,Okla., andNaplesFla., the home bases of Rooney Holdings, Inc.

Prior to his appointment to theVatican, Rooney was the chief executive officer of the family-owned corporation and the chairman of Manhattan Construction Company, whose projects include the George H.W. Bush Presidential Library inCollege Station,Texas; portions of theOklahoma Cityand Dallas-Forth Worth airports; the visitor center under construction at the U.S. Capitol; convention centers inDallasandMobile,Ala.; and the Santa Fe Opera Theater inNew Mexico.

Rooney is a member of the Notre Dame School of Architecture Advisory Council. Other affiliations with Catholic organizations include membership of the strategic planning committee of the St. Francis Health System inOklahomaand the board ofCasciaHallPreparatory School, an Augustinian middle and high school inTulsa. A noted supporter of the Republican Party and President George W. Bush, Rooneys philanthropic and civic activities also have included support of the Southwestern-area chapters of the American Red Cross, theUnited Way, the Boy Scouts and numerousOklahomaandTexasbusiness organizations. He earned his undergraduate and law degrees fromGeorgetownUniversity.