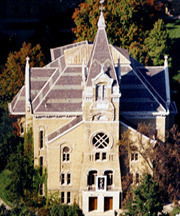 Just in time for Halloween, the University of Notre Dame’s Washington Hall will be prominently featured in a television program titled “Haunted Campuses,” scheduled to air this month and in December on The Travel Channel (local cable Channel 54). Part of the network’s “Weird Travels” series, the segment is set to air Oct. 24 (Sunday) and Dec. 18 (Saturday) at 9 p.m. and midnight EST.p. A film crew visited campus this spring to tape the program, which is likely to include interviews with University administrators, staff and students, as well as re-enactments of various legends and assorted campus footage.p. Long fabled to be haunted (by the ghost of, among others, Notre Dame football great George Gipp), Washington Hall has set the stage for numerous ghost stories through the decades. These spooky tales have previously been featured in books, articles and other television programs.p. Built in 1881, Washington Hall was home to Notre Dame’s academic theater for 123 years. With the opening of the University’s new Marie P. DeBartolo Center for the Performing Arts this fall, the hall now remains in use as a performance space with an emphasis on productions staged by student organizations and residence halls and serves as a venue for selected special performances by non-University groups.p. For further information about the legend of the Washington Hall ghost, visit http://www.nd.edu/~washhall/ghost.html on the Web.p.