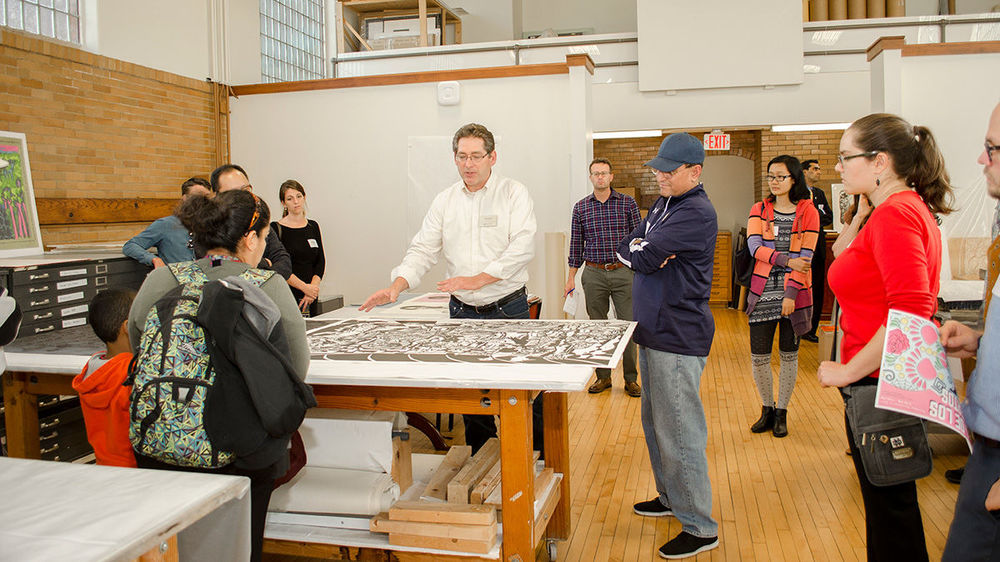 Scott Lanier had seen the movie “Rudy.” He even lived in Chicago for a few years, just 90 minutes west of South Bend along the Indiana Toll Road.

But before moving here for a job at the University of Notre Dame, he had never set foot in the city.

A native of central Georgia, southeast of Atlanta, Lanier joined Notre Dame as director of dining and nutrition for religious houses in April.

On Tuesday, Oct. 17, he joined new faculty members and administrators from Notre Dame, Saint Mary’s College, Holy Cross College, Indiana University South Bend and Ivy Tech Community College for a tour of downtown South Bend and the near west side.

The event did not include Mishawaka this year because of time, but Dave Wood, the city’s mayor, addressed the group afterward during a catered reception at the Center for Arts and Culture.

Lanier, who moved to South Bend from Athens, was pleased to observe elements of the same college town atmosphere here, from the close relationship between the University and community to the focus on arts and culture as contributors to quality of life.

“When I moved here I moved downtown kind of hoping that there would be more to do, and it seems to be going in that direction,” Lanier said. “From the things I’m hearing, they’re moving more toward a college town with arts and culture, so that’s exciting.”

“That’s exactly what we are,” DeCleene said. “Our colleges certainly influence the culture of the community, but the community has an identity of its own.”

DeCleene touched on that identity during the tour, referencing the city’s past as a center of manufacturing in the Midwest; it’s decline in the second half of the 20th century with the loss of Studebaker and other large employers; and its recent efforts to adapt to the new information economy in partnership with Notre Dame.

This was the seventh straight year for the tour, which introduces new faculty members and administrators to the greater South Bend area and encourages them to explore and invest in the community.

Like Lanier, Jessica Hale, a native of nearby Warsaw, had never visited South Bend before landing a job here with Indiana University South Bend in July.

“It’s better than what I thought beforehand,” said Hale, who is married with two children, ages 3 and 1. “I always had an impression of South Bend as a high-crime area. But now that I’ve been here, that impression is gone.”

Of the tour itself, her husband, Mark Grossman, said, “I enjoyed it. We’ve wanted to take the kids to some places (in the community) for a while, and now we’re more motivated to do it.”

Vanessa Young, an assistant professor of biology at Saint Mary’s College, moved here from Clemson, South Carolina, with her husband and their two young children, ages 3 and 9 months, at the end of June.

“It seems like a really nice community. We love our neighborhood,” Young said. “It’s quiet and safe. And it seems like there are a lot of things for kids to do.”

“I enjoyed it,” she said. “I learned that (the Center for Arts and Culture) and Civil Rights Heritage Center across the street exist.”

And that’s the point, according to Jackie Rucker, associate director of community relations for Notre Dame.

“My background is human resources,” Rucker said. “And from a human resources standpoint, if you don’t get families connected to the community, they leave.”