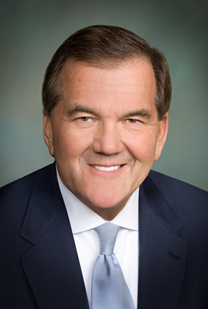 Shortly after the Sept. 11, 2001 terrorist attacks, Tom Ridge became the public face of America’s national security concerns as he became the first secretary of the newly created U.S. Department of Homeland Security. Although he left the post in 2005, Ridge continues to serve as an expert in global security as the president and CEO of Ridge Global LLC.

Ridge will be visiting the University of Notre Dame during the weekend commemorating 9/11. As part of his visit, he will deliver a talk, “A Conversation with Tom Ridge,” from 3:30 to 5 p.m. on Sept.10 (Friday) at the Mendoza College of Business Jordan Auditorium. The event is free and open to the public.

He also will be recognized during the Notre Dame-Michigan football game on Sept. 11.

On 9/11, Ridge was serving as the governor of Pennsylvania when he received reports of planes flying into the World Trade Center towers and the Pentagon building. A fourth plane that “disappeared from radar” was discovered to be United Airlines Flight 93, whose passengers mounted a heroic effort to take control of the plane from the hijackers. Ultimately, the plane crashed in a field near Shanksville, Penn., killing all 44 on board, including the four hijackers.

The former governor currently is honorary co-chair of the Flight 93 National Memorial Campaign, an effort to raise $18 million dollars to complete the memorial in Shanksville. The site currently is under construction with plans to dedicate the memorial on Sept. 11, 2011 – 10 years after United Flight 93’s fateful crash.

The Flight 93 National Memorial will be the only national memorial dedicated to the events of 9/11.