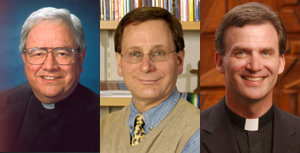 “Latino” is not an ethnic label. According to census officials it designates “a person of Cuban, Mexican, Puerto Rican, South or Central American, or other Spanish culture or origin regardless of race.”

But whatever their multiple ethnicities, Latino people have been present in America longer than any other people aside from Native Americans. They number some 50 million in the United States today, and it is reliably estimated that their population will be doubled by the middle of this century.

The facts that more than two-thirds of these people are Catholics and that they comprise some 35 percent of the Catholic Church in America make it all the more remarkable that their resurgence in the life of that church should seem such a new thing.

Three Notre Dame scholars who are studying and assisting that resurgence will be in San Antonio this weekend for a Saturday Scholars presentation titled “Latinos and the Remapping of American Catholicism.” The talk is part of the University’s home-away-from-home football game Saturday (Oct. 31) against Washington State. Sponsored by the College of Arts and Letters, Saturday Scholars lectures are intimate discussions with Notre Dame’s most engaging faculty speakers on some of the most pressing and fascinating issues of our times.

Because of his research and teaching on the mutual effects of Latino culture and Catholic faith, Rev. Virgilio P. Elizondo, professor of pastoral and Hispanic theology at Notre Dame, is regarded by many in the religious and academic world as “the father of U.S. Latino religious thought.”

The sobriquet may owe as much to his ministry as to his scholarship. A native of San Antonio, Father Elizondo became well known as an advocate for underpaid and exploited Mexican-American laborers in his native archdiocese during the early 1970s, and as an increasingly self-conscious Mexican-American community began to assert itself politically and culturally, he established the Mexican-American Cultural Center at Assumption Seminary. He also served for many years as pastor of San Fernando Cathedral, where the Sunday Spanish Mass at which he presided became famous internationally when it was televised and carried via satellite from the cathedral to more than 1 million households.

The 1997 recipient of Notre Dame’s highest honor, the Laetare Medal, and a member of its faculty since 2000, Father Elizondo is an indispensable consultant for journalists and scholars interested in the religious and cultural life of Latinos in the United States. A former editor of the international theological journal Concilium, he also is the author of numerous articles and books including “Galilean Journey: The Mexican American Promise,” “The Future is Mestizo: Life Where Cultures Meet,” and “Guadalupe: Mother of the New Creation.”

The teaching and scholarship of Timothy Matovina, professor of theology and William and Anna Jean Cushwa Director of Notre Dame’s Cushwa Center for the Study of American Catholicism, concern Latino theology and Catholic history in the American Southwest, particularly the devotions, rituals and popular religious practices of the region. He is the author or editor of 12 books, including “Guadalupe and Her Faithful: Latino Catholics in San Antonio, from Colonial Origins to the Present” and “Presente! U.S. Latino Catholicism from Colonial Origins to the Present.” As does his friend, Father Elizondo, Matovina also lectures and leads discussions on Latino pastoral ministry and theology throughout the United States.

For Rev. Daniel G. Groody, C.S.C., assistant professor of theology and director of the Center for Latino Spirituality and Culture in Notre Dame’s Institute for Latino Studies, priesthood and scholarship easily intermingle. In addition to having spent many years doing pastoral work and research in Latin America, particularly along the U.S.- Mexican border, he teaches, writes and lectures on U.S. Latino spirituality, globalization and the relationship of Christian spirituality to social justice. In addition to the numerous articles and books he has written on these themes, he is the producer of award-winning documentary films on them as well, including “One Border, One Body: Immigration and the Eucharist,” and “Dying to Live: A Migrant’s Journey.”

These three colleagues and friends are uniquely suited to interpret the new life and new challenges Latinos are bringing to the Catholic Church in America and to imagine how a more pronounced Hispanic presence and renewed understanding of its history and immigrant foundations might reinvigorate the faith of American Catholics and enrich the lives of all Americans.

Which, along with watching a certain football game, is what these three amigos from the Universidad de Nuestra Senora will be doing in San Antonio.