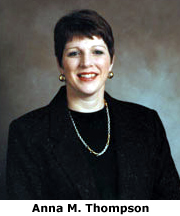 As chief administrator of the center, Thompson will manage the facilitys day-to-day operations and serve as its representative to the campus community and the world at large. She will function as a liaison with the Universitys academic departments and other constituencies, as well as with the local and national arts communities, and will play a key role in the centers marketing, fundraising and programming activities.

A 20-year performing arts administration veteran, Thompson comes to Notre Dame after serving since 1998 at CSB/SJU, two coordinate, but separate Benedictine liberal arts institutions inSaint JosephandCollegeville,Minn., where she curated the fine arts and oversaw all operations and finances for fine arts programming. Under her direction, the CSB/SJU program produced and presented more than 300 events annually in five theaters and four visual art galleries between the two campuses. During her tenure, the combined annual operating budgets increased from $600,000 to $2 million within eight years, and revenue grew from $65,000 to $490,000 during the same time.

We are extremely pleased to announce the appointment of Anna Thompson as top administrator of the Universitys flourishing performing arts enterprise,said Thomas G. Burish, Notre Dames provost.She brings to the position a wealth of talent and experience that will greatly enhance the impact of theDeBartoloCenteron the local, regional and national cultural landscapes, and serve the Notre Dame community, as well as the multitude of visitors who surely will benefit from the results of her efforts.

Prior to her most recent position, Thompson served from 1991 to 1997 as director of education at Butler University in Indianapolis, where she created the education program and increased participation by 800 percent, curated and administered all arts education programs, and created the universitys first distance learning program for national touring Broadway productions. She also served from 1989 to 1991 as performing arts coordinator for the Indianapolis Museum of Art.

Thompson was recognized for her accomplishments in 2004 with the North American Performing Arts Managers and Agents Award for Excellence in Presenting the Performing Arts. A graduate ofAlbionCollege, she earned her masters degree fromWesternMichiganUniversityand did further post-graduate studies atButler.

The performing arts center, which opened in 2004, was underwritten with a portion of a $33 million gift to Notre Dame in 1989 from the late Edward J. DeBartolo, a 1932 Notre Dame graduate, in honor of his wife, Marie. The 151,000-square-foot building was built at a cost of $64 million and houses five professional performance halls – the 900-seat Judd and Mary Lou Leighton Concert Hall, the 350-seat Patricia George Decio Mainstage Theatre, the 100-seat Regis Philbin Studio Theatre, the THX-certified Browning Cinema, and the Chris and Anne Reyes Organ and Choral Hall, which features a hand-crafted organ of some 2,550 pipes.

The center also is home to Notre Dame’s Department of Film, Television and Theatre and includes classrooms, editing studios, a recording studio, a scene and prop construction shop, a sound stage, a costume shop, a computer-aided design lab, a lighting lab, and music and theater rehearsal halls.