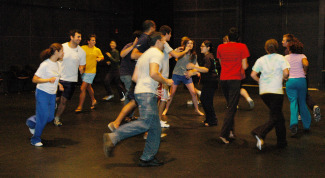 Beginning this fall, plays created in the “New Playwrights Workshop” of the University of Notre Dame’s Department of Film, Television, and Theatre (FTT) will be part of the regular theater season.

Students will perform the plays “Cargo” and “Scattered Voices” in six performances Oct. 6 to 11 (Tuesday to Sunday) in the Philbin Studio Theatre of the University’s DeBartolo Performing Arts Center. Times and ticket information are available on the Web at http://performingarts.nd.edu.

The plays were created in a course called “Theatre and Social Concerns,” taught by Anton Juan, professor of theater and an internationally acclaimed director/playwright.

In the theater course, Juan “imparts to them the value of listening with their mind’s eye, with all their senses,” he said. “I teach them the value of other people’s realities, and why it’s important to mark the differences in the world.”

The function of playwriting is to tell a story, he adds. “Cargo” tells the story of immigrants to America—at the World’s Fair, migrants are sealed inside crates to be exhibited; the seals break, and the migrants reveal their memories that lurk within.

Joe Vittorio, a senior finance and theater major, interviewed three of the immigrants on whose lives the play was based. One of them was a building services custodian.

“She’d been cleaning my building since I was a freshman,” he said. “I learned about this past, how much hardship she’d been through to get here. I thought I knew her, but it changed my perceptions of a lot of things. It’s amazing how much you learn when you ask a question of someone who’s been through so much.”

Michael Lewis, a double major in preprofessional studies and theater, interviewed his father, who emigrated from Nigeria in the 1980s.

In one of the more emotional moments of the interview, Lewis recalls, “he told me he regrets coming here and leaving his family behind. That’s been the driving force behind our play—not all immigrants find the American dream.”

The goal of the play, he adds, “is not to make a documentary or exposé. We’re trying to tell the stories of people and their experiences to bring new insight to the issue.”

Shay Thornton, a senior theater and education major, is directing the play “Scattered Voices.” She was part of a team that two years ago wrote the play that tells the stories of incarcerated adolescents and is based on letters exchanged with young men from a regional juvenile correction facility.

“We were not allowed to go in there, to protect them and to protect us,” Thornton recalls. “I got these incredible poems from them. Even though we didn’t see their faces, it was putting a face on the problem of juvenile justice. How they felt about their families and their first loves. Everyone feels that way. What I tried to impress upon the cast is that all of us are only two or three bad decisions away from being in the same spot.”

The plays have realism, she adds.

“But we have a lot of multimedia and movement pieces as well. You’ll see single mothers, families of higher and lower socioeconomic groups. We can’t put a single face on juvenile delinquency,” she says, “because there isn’t one.”