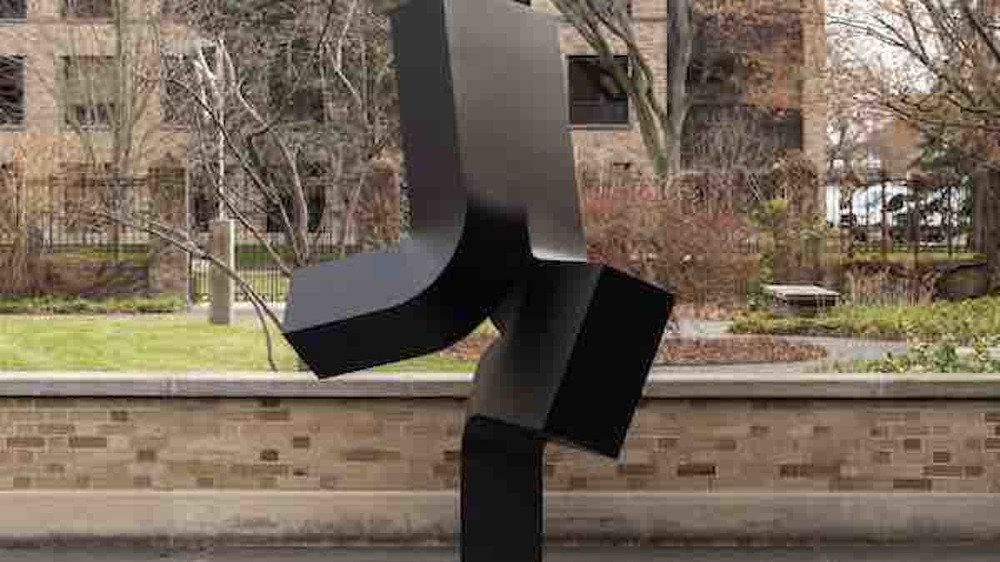 There is little doubt that Modern and Contemporary sculpture play a significant role in the collection, and by extension, the persona of the Snite Museum of Art. The collections of both Ivan Meštrović and George Rickey have played definitive roles.   Against this backdrop, the Museum is pleased to announce the gift of a major sculpture by Clement Meadmore – one of the most compelling and eagerly sought public sculptors of the second half of the 20th century.

Born in Melbourne, Australia, and educated at the Royal Melbourne Institute of Technology, Meadmore began making welded sculptures in the 1950s.   He moved to New York City in 1963 to more closely experience the vanguard of Contemporary art.  Deeply moved by both Minimalism and its forerunning antithesis, Abstract Expressionism, he forged a career as one of the most distinguished abstract sculptors of his generation.

Meadmore is most widely celebrated for his bold statements based on a vocabulary of geometry with a strong emphasis on crisp linear contours and broad planes. Whether working in aluminum, steel, or bronze, he most frequently finished his sculptures with a black patina. For all of the aforementioned, he can be seen in the ambiance of Minimalism. However, his introduction of movement and frequent use of curved forms celebrate his affection for the visual energy of Abstract Expressionism.

Upbeat, 1984, coveys the buoyancy of the upright composition of Meadmore’s iconic style. The work and title also convey the sculptor’s life-long interest in music, particularly jazz.  Upbeat is a gift of the Clement Meadmore Foundation. It will be placed in the Museum courtyard to be a point of dialogue with other major outdoor sculptures in the collection.

“The Museum is deeply grateful for this exceptional gift which has been eagerly placed and is already engaging audiences at the heart of our sculpture courtyard,” shares Director, Dr. Joseph Antenucci Becherer. “Meadmore’s iconic style is masterfully available in this work and is at once both lyrical and minimalist.”

Gift of the Clement Meadmore Foundation

Originally published by Gina Costa at sniteartmuseum.nd.edu on January 08, 2020.