“You must have the greatest job in the world!” people often say to George Rugg. He’s curator of the Joyce Sports Research Collection in Rare Books & Special Collections in the Hesburgh Library.

Rugg has a background in art history and for a time studied and taught courses in Early Modern European painting before joining the library. But since he was a boy he says, “I was always profoundly interested in sports, especially baseball. Playing it, reading about it, watching it. I was obsessed with it. And that interest extended to many other sports, including football and hockey.” 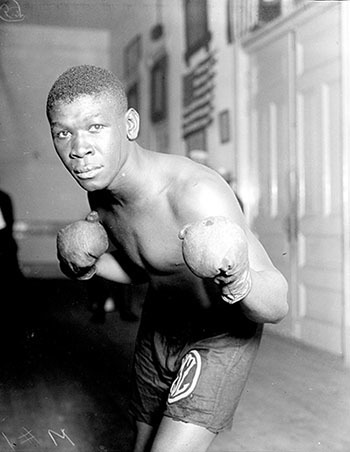 The Joyce Collection is an internationally recognized resource in the history, sociology, economics and culture of American sports and their antecedents, Rugg notes, adding that the collection holds no Notre Dame sports-related material—everything University related is held in the University Archives on the 6th floor of the Hesburgh Library.

The collection includes 5,000 book titles alone, plus hundreds of periodicals, photographs (including an important collection of boxing photographs), and tens of thousands of pieces of printed ephemera on athletic sports, physical culture, recreation and leisure, as well as sports literature and journalism. The emphasis is on American sports up to about 1950.

“People think, ‘Oh, sports,’ Rugg says. “But sports have been a subject of scholarly interest for decades, in sociology, anthropology and history. A researcher might be interested in topics such as the economics of football in the 1930s—what were ticket and concession prices?

“It’s a ‘destination collection,’ a very deep research collection that attracts scholars from around the world. But users might also be journalists and filmmakers in addition to scholarly researchers—all kinds of different people use the collection. On the website (rarebooks.library.nd.edu) two-thirds of the hits are for sports.”

The collection is also known for its breadth, with several sport-specific sub-collections of national stature, including those dedicated to boxing, wrestling, American football, billiards and golf.

“We have the best boxing-related collection in the world, and the best baseball collection after Cooperstown,” he says.

The collection’s hundreds of periodical titles include Sporting Magazine, the earliest known sports journal, published in London from 1792 to 1871, in addition to ephemera such as guides, rulebooks, game programs, and typewritten or handwritten manuscripts. 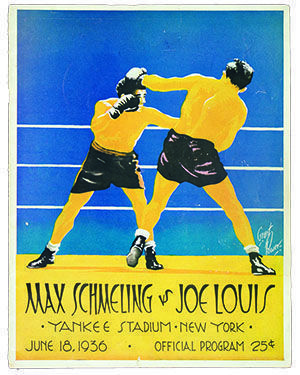 Ephemera (transitory written materials not meant to be preserved) are particularly important, Rugg says, because they may be the only surviving copy.

The collection has been assembled over the past 40 years, with important donations and purchases both large and small.

The University began collecting sports materials in the 1960s, prompted by alumni groups. The collection as it exists today evolved from the 1977 purchase of the full inventory of Goodwin Goldfaden, the first sports publication dealer in the country.
“The Goldfaden collection included around 30,000 books and 300,000 additional pieces of printed matter,” Rugg says, who was tasked with sorting and cataloging the collection when he joined the University in 1994.

“It proved to be as good an investment as the University’s ever made. The purchase came at just the right time—before people started collecting baseball cards and other sports memorabilia. Memorabilia, between 1980 and 1990, increased in value exponentially. At the time the Goldfaden collection was purchased, the first issue of Sports Illustrated only had nostalgic value.”

At right: A program from the first Max Schmeling—Joe Louis heavyweight fight in 1936. The two contests, between an African-American and a German of the Nazi era came to represent to Americans the struggle between democracy and Fascism.

The purchase was also prescient, Rugg adds. “It anticipated the subsequent decade’s new interest in the application of scholarly methodologies to the study of sports.”

In 1987, the collection was endowed in honor of Rev. Edmund P. Joyce, C.S.C., the University’s longtime executive vice president. The endowment, and another funded by John and Dessa Campbell, allow for continued growth and development of the collection.

The library recently acquired the collection of Nat Fleischer, the most important boxing editor of the 20th century and editor of Ring Magazine.

“When you’re collecting rare books and manuscripts, you’re at the mercy of the market,” he says. “A book we acquired last year was about what are called the Negro Leagues. It dates from about 1905, and is one of only five copies known. If you bid at auction, maybe you get it, maybe you don’t. You can’t anticipate what’s going to be available.”

Because the collection is so well known, people also offer collections—but these days, he adds, “it’s less about finding benefactors than finding things we don’t have.”

When the library is interested in making a purchase to add to the collection, “We have to have ironclad provenance. We only deal with reputable people, people we’ve known and worked with a long time.

Although there’s a Babe Ruth-autographed baseball in the collection (one of 30 or so the collection received as gifts), there’s one sports-related thing Rugg doesn’t collect for the library. “No baseball cards,” he says.

You’ll be asked to review and sign the reading room rules before using or viewing materials. Visitors must sign in and out; no food or drink is allowed; hands should be washed before handling materials and cell phones must be silenced.

In addition, pens are strictly prohibited in the Reading Room—only pencils may be used. Personal laptops or use of the workstation are permitted. No photography is allowed, but if the condition of the material permits, scanning by librarians is possible. Email or call in advance (rarebook@nd.edu or 631-0290) so materials can be ready when you arrive. Most items can be retrieved while you wait, but some make take up to two business days.