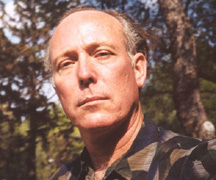 Brain rinsinga kinder, gentler form of brainwashingtakes only a nickel or dime’s worth of our souls at a time, says University of Notre Dame sociologist Eugene W. Halton.

The Soviet Union, he points out, controlled people by torture and punishment. The West, he says, found a way to control people with pleasure.

Materialism and consumption in America are the subjects of Halton’s new book of essays,“The Great Brain Suck,”published by University of Chicago Press.

Rampant consumption has turned the average American into what Halton calls"Big Zombie."

“Big Zombie wants to live in the big McMansion, drive a big SUV to the big mall in a big body,”he explains.“There is no one cabal directing it, but it is a system directive. The way to alienate people from their bodies is to encase them in them.”

The solution, to Halton, is not about living a Spartan lifestyle, or going without material possessions. It’s pretty simpleinstead of experiencing reality by watching it on television, turn off the TV, computer and iPod and live a real life instead of a virtual life.

Here’s the paradox, he says: Our brains are being flooded with knowledge daily, and yet somehow are being sucked dry at the same time. We have more and more information, but seem to know less and less. We’re living in a virtual world and have forgotten how to experience the real world.

The downward slide started in the 1950s, with the rise of what he calls"mega-technic America,"led by the explosion of the number of automobiles on the street, the development of suburbs, the interstate highway systemand the reach of television and advertising into the home.

The way to alienate people from local neighborhoods and local commerce is to create de-localized commerce centersmega mallsthat have a claim on civic life, so citizens become nothing more than consumers.

“I see it as at odds with democracy,”Halton contends.“It propagandizes the message that you’re only adequate as far as you can buy. We become not citizens of a community, but consumers of anyplace, and no place.”

In a sense, Americans need to become more materialistic, he says, or at least more involved with the sensuous objects and activities of everyday life.

“I would like people to wake up from the delusional dream that mega-technic America has become, and realize how much more there is, potentially, in America and in their own everyday lives,”he says. Living a real life, he adds, requires self-directed activities"that help us realize our spontaneous feelings and grow in our beliefs."

It’s as simple as making your own food, instead of buying prepackaged food or going out, he says. A shared home-cooked meal will be far richer than any dinner eaten at a restaurant.