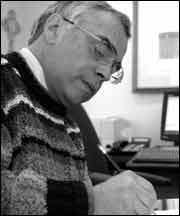 When it comes to the world of financial aid, Joe Russo clearly is a part of the fabric, if not a master weaver.p. Russo has been at Notre Dame for 26 years ? long enough to counsel the children of the students he has served. He refers to himself as an ?elder statesman? of higher education financial aid. In the national arena, a better term might be ?influencer.? Russo has written two books and numerous professional articles, and has been editor of the Journal of Student Financial Aid since 1986.p. His expertise has been sought by Congress, the National Collegiate Athletic Association, and aid-providing financial organizations from Citibank to Sallie Mae. Little wonder he is in the Rolodex files of journalists at NPR, NBC and the New York Times.p. For Russo, it’s all part of the job; all part of his primary direction? supporting the enrollment goals of quality and diversity of the Notre Dame student body . Or, as Russo alternately puts it, ?building the best freshman class ever.?p. As Russo recounts, his success is rooted in a bold change in Notre Dame’s approach to financial aid. He came to the University in 1978 and spent the better part of the 1980s stretching the financial aid resources available, ever mindful of the national trends in his profession. It was in 1989, after several years of double-digit tuition increases, that University officers and trustees posed the question he had been waiting for: ?How are families affording us? Is it impacting our quality??p. Russo still jumps at the point: ?That was my carpe diem !? Though he was given a year to investigate the issue, it took a matter of days to report back with the research to show that Notre Dame did not compare well to what peer institutions were doing.p. Additional University scholarship funding immediately became a top priority, and the deployment of significant unrestricted funds ? such as those from the Sorin Society and NBC football contracts, along with very successful capital campaigns ? began to build the needed resources. During the 1990s, Notre Dame truly became a ?more affordable institution,? based not so much on sticker price, but the cost after subtracting scholarship assistance.p. The change has been dramatic, with 45 percent of this year’s freshman class averaging $16,000 in University scholarship aid?that is, not loans, but rather money given to students based on need.p. ?In the past few years, we have been able to look them in the eye and say, ?We can make this happen,? ? Russo said. ?We are really proud as a university to be ?need-blind? in the admissions process and are one of the few universities in this country that can say to admitted students that we will meet their needs for four years.?p. After all these years, one-on-one counseling still engages Russo.p. ?It is an art and a science,? he said. ?College is a huge decision for families. Every file that comes through is precious and thoroughly reviewed by human beings.?p. But the demands always change. Each year, students? applications are reevaluated, because every year can bring change. The commitment to making Notre Dame affordable every year contributes to the University’s remarkable fourth-in-the-nation ranking for student retention, with 94 percent of students graduating in four years.p. As family planning for college has become more crucial and complex, Notre Dame has responded. The University’s support of the Independent 529 Plan for private schools became a reality last fall, creating a new prepaid savings option designed to lock in future tuition at today’s prices. Another illustration was the creation of the very attractive provisions of the Notre Dame Undergraduate Loan, which was among the first of its kind in the late 1990s.p. ?Now we are a national leader,? said Russo, who can switch from the big picture to the intimate challenges of a particular family in a second. ?Planning is the key,? he says. ?The sooner you start saving, the cheaper it is going to be and the more choices you?ll have.?p. More information on financial aid at Notre Dame is available on the Web at http://financialaid.nd.edu/