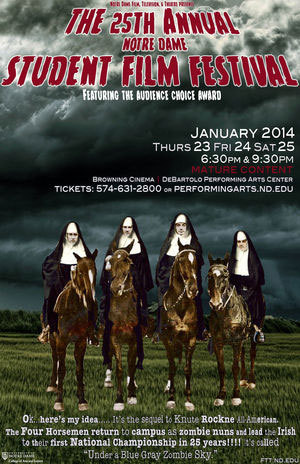 The University of Notre Dame’s Department of Film, Television, and Theatre (FTT) announces the 25th Annual Notre Dame Student Film Festival from Jan. 23 (Thursday) through Jan. 25 (Saturday) in the Browning Cinema. As in 2013, audience members will be invited to vote for their favorite film via text message. The Audience Choice Award will be presented to the student director(s) of the winning film before the final screening.

Celebrating its 25th year, the Notre Dame Student Film Festival screens films that were made by undergraduate students during the past year as class projects in the Department of Film, Television, and Theatre.

The Notre Dame Student Film Festival is an annual launching pad for student filmmakers as they begin their careers in the film, television and entertainment industry. Over the past 25 years, the festival has featured the first films of future award winners such as Peter Richardson (2011 Sundance Film Festival Grand Jury Award winner, “How To Die in Oregon”) and John Hibey (2012 Sundance Film Jury Award Winner for Short Filmmaking, “Fishing Without Nets”), as well as numerous others.

Festival founder and FTT faculty member Ted Mandell says, “Honestly, I can remember every film from every year. Unfortunately, I can’t remember much else.”

Tickets may be purchased online at performingarts.nd.edu, by phone at 574-631-2800 or in person at the DeBartolo Performing Arts Center ticket office.