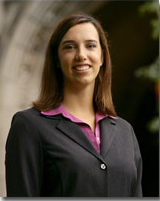 When I went to law school, I never intended to practice law,says Bridgette Carr, associate clinical professor of law for the Legal Aid Clinic at Notre Dame Law School.For better or worse, people listen to you more if you have a J.D. after your name. I went to law school so that I could get a seat at the table and be heard.

Carr does indeed practice law, lending her voice and expertise to the cause of seeking justice for noncitizens, particularly those who are victims of forced migration.

Many people are aware of the issues surrounding economic immigration,Carr said.This is what our border debate is about right now, where people are crossing into the U.S. by choice to find work and earn a better living for their families.

But what most people dont think about, she said, is forced migration, which involves individuals who are fleeing persecution, or who are in the United States as a result of force, fraud or coercion.

Carrs scholarly and practical work in the area of human trafficking and forced migration began while she was a law student at the University of Michigan. There, Carr immersed herself in advocacy for the poor and began to focus on assisting refugees, further honing her skills through an internship at Amnesty Internationals London office and then at Detroits Freedom House, which represents homeless or indigent refugees seeking asylum in the United States or Canada.

Following law school graduation, Carr began work as an assistant professor of law and director of the Asylum and Immigrant Rights Law Clinic at Ave Maria School of Law in Ann Arbor. Carr and her students assisted immigrants and refugees with a wide variety of legal needs. Her particular focus, however, became advocacy for women and children refugees and victims of human trafficking in the United States.

Carr earned her undergraduate degree in psychology from Notre Dame in 1998. From there, her road to law school and beyond was a winding one.

Following graduation, Carr began a year of service with AmeriCorps in a Fort Wayne, Ind., middle school, where she taught English, science and math to children from 23 countries who spoke 14 different languages.

Her next step was Indiana Universitys School of Medicine, to which she was awarded a full scholarship. Shortly after starting her medical education, she realized that the health field was not her passion. She opted for another year of AmeriCorps service before deciding thatadvocating for those without a voice in society is my true calling.

Carr aims to help her students and others distinguish betweeneconomic migrantsbroadly defined as people who choose to enter the U.S., particularly out of economic necessityandinvoluntary migrantsvictims of human trafficking and asylum seekers. Asylum seekers are those who flee their countries because of persecution or the fear of persecution,because of race, nationality, political opinions, religion, or identification with a certain social group.

Carr says that women and children are often treated brutally in America and are victims of human trafficking.

Societys most vulnerable are frequently forced into slavery in neighborhoods throughout the United States,she says.

This human trafficking takes such forms as forced labor, sexual slavery or forced marriage.An upcoming report on NBC News will feature Carrs work with one of her clients.

Carr says she came to Notre Dame Law School because she knows its a placewhere we can talk about all people as human beings, and where affronts to humanity matter.