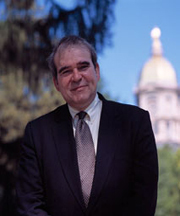 Americas foremost cynic, Ambrose Bierce, was perhaps exaggerating when he defined the verb “consult” as “to seek anothers approval of a course already decided on,” but most of us know what he means. In venues ranging from newspaper op/ed pieces and Congressional subcommittees to church pulpits and academic conferences, proponents of nearly every imaginable human behavior can quickly proffer an impressively credentialed ethical “expert” or two to testify on their behalf. In a morally anxious age, ethics has become one of academias growth industries.p. Since its opening in the fall of 1999, Notre Dames Center for Ethics and Culture has attempted to address the besetting ethical controversies of our age in an advertently and purposeful Catholic voice. According to center director David Solomon, he and Nathan O. Hatch, Notre Dames provost, wanted to establish an ethics center which would not only amplify that voice in the Universitys classrooms and research settings, but also make it “more audible in the unrelentingly secular contemporary public debates on ethical matters.”p. The center celebrated its fifth anniversary last month with a conference titled “Looking Back, Looking Forward: Ethical Reflection in a Changing Cultural Landscape.” Cardinal Avery Dulles was among the participants, as was Ralph McInerny, Michael P. Grace Professor of Medieval Studies and director of the Jacques Maritain Center at Notre Dame; and Dr. Edmund Pellegrino, professor emeritus of medicine and medical ethics at the Center for Clinical Medical Ethics of the Georgetown University Medical Center and 1998 recipient of Notre Dames highest honor, the Laetare Medal. “From the beginning,” says Solomon, “our mission has been inspired by Pope John Paul IIs critique of contemporary culture, especially as he expressed it in his three major encyclicals, Veritatis Splendor, Centesimus Annus, and Evangelium Vitae. These encyclicals eloquently distill the truths at the core of the Catholic ethical tradition and make them speak to the most difficult ethical issues of our times.”p. The success of the centers first major conference, “A Culture of Death,” in 2000, deepened Solomons confidence in John Pauls compelling critique. Devoted to an examination of Pope John Paul’s apocalyptic assertion in Evangelium Vitae, that modern life is convulsed by “an enormous and dramatic clash between good and evil, death and life, the ‘culture of death’ and the ‘culture of life,’” the conference attracted more than 200 enthusiastic participants to discuss such issues as war and peace, terrorism, capital punishment, the role of education, the importance of hospitality, poverty, bioethics and reproductive technology, and social and economic justice.p. The center sponsored two other such conferences, “A Culture of Life” and “From Death to Life: Agendas for Reform” in 2001 and 2002, respectively. As well attended and received as the inaugural gathering in 2000, these triennial events suggest the boldness of the centers mission, which is nothing less than an attempt to transform contemporary culture.p. The centers staff make no pretense of the neutrality so commonly championed in most contemporary ethical research and teaching. Nevertheless, according to the philosopher Alasdair MacIntyre, permanent senior research fellow of the center, its ambitious design requires a sincere and searching discussion of “shared assumptions, the habits of mind, what is taken for granted and not said even more than what is said.” Participants in this discussion, he insists, “must not proceed by intellectual aggression, which is the chosen mode of public controversy in our culture, but instead with enabling people to lower their defenses to become more open with themselves as well as with us.”p. In addition to its conferences, the center has sponsored lectures on a variety of contemporary issues and organized the Clarke Family Medical Ethics Conference in conjunction with the Alumni Association. It also is working on the launch of two publications projects and two summer institutes.p. Stanley Hauerwas, Duke University theologian and former member of Notre Dames faculty, is also a member of the centers advisory board. “Whats really going to be important in terms of the Centers effect will not be seen in immediate scholarship,” he says. “It will be seen 10 and 15 years from now as younger people begin to develop what the center has made possible in a way that really changes the questions.”