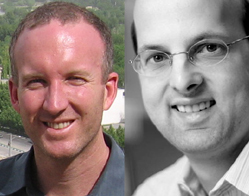 For ages, philosophers and theologians have sought to reconcile a belief in the existence of a benevolent God with the reality of a world plagued by evil. Adding to this body of thought are University of Notre Dame philosophers Michael Rea and Samuel Newlands, who recently were awarded more than $1.4 million from the John Templeton Foundation for their project “The Problem of Evil in Modern and Contemporary Thought.”

According to Rea, a professor of philosophy who also is director of Notre Dame’s Center for Philosophy of Religion, the multi-faced project will place special emphasis on questions about how the problem of evil was raised and addressed by important historical figures in the 16th and 17th centuries, on philosophical problems raised (then and now) by the existence of natural evil, and on strategies for explaining—or showing why we shouldn’t expect to explain—why God might permit the kinds and amounts of evil we experience in the world.

The grant will fund conferences, competitive fellowships, and publication prizes from 2010 through 2013. In addition to advancing new ideas, the project will commemorate the 300th anniversary of Gottfried Leibniz’s seminal “Theodicy” with a new translation and series of events exploring the historical context and ongoing relevance of his work on the problem of evil.

“One aspect of the grant I find most exciting is that it knits several areas of traditional strengths in our Department of Philosophy together in a single project,” said Newlands, assistant professor of philosophy and assistant director of the Center for Philosophy of Religion. “By funding simultaneous research in 17th-century modern philosophy and contemporary philosophy of religion, metaphysics and epistemology, this grant has the potential to discover new connections between philosophy and its history that will have long-term impacts on all our sub-fields.”

Established in 1976, the Center for Philosophy of Religion seeks to promote work on traditional topics and questions in the philosophy of religion and to encourage the development and exploration of specifically Christian and theistic philosophy.

The John Templeton Foundation (www.templeton.org) strives to be a philanthropic catalyst for discovery in areas engaging life’s biggest questions, ranging from explorations into the laws of nature and the universe to questions on the nature of love, gratitude, forgiveness and creativity.

“The center has established an international reputation as the best place in the world to pursue research in philosophy of religion,” Rea said, “which partly explains Templeton’s current enthusiasm about funding projects through the center. And the work funded by this grant, together with our other activities, will help us to maintain that reputation in years to come.”

For more information on the project, go to http://evilandtheodicy.com