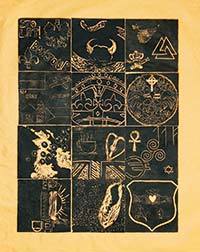 When Doug Franson shared details of an exciting summer program for children at the Notre Dame Center for Arts and Culture, Lori Bush immediately saw the potential for adapting the program as a staff team-building exercise.

Franson is the assistant director of Segura Arts Studio in the Notre Dame Center for Arts and Culture. Studio staff, including master printer Jill Lerner, report to Bush, director of finance and administration for Auxiliary Operations.
The original program was developed by Jackie Rucker, associate director of community relations, for the summer Innovative Thinkers camp at the NDCAC. 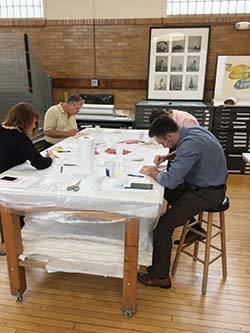 As an enrichment activity for the kids, Rucker pulled together resources from the DNA Learning Center in the College of Science and the Segura Studio — students tested their mitochondrial DNA, then developed an art concept based on their genetic background. Students then printed their designs in the studio.

For the staff project, participants first had their DNA tested through Ancestry.com. For the team-building exercise, Bush brought in Eric Love, director of staff diversity and inclusion in Human Resources to speak to the group.

Says Love, “they looked at their DNA tests, which in many cases revealed genetic backgrounds that were the opposite of what they’d thought. Some had cousins in the audience they didn’t know. We talked about connectedness, and how important it is to know who we are and where we came from. We are more diverse than we think, and we have more in common than we know.”

Franson, who participated in the exercise, was one of those surprised at the DNA test results. “I found out that I’m 32 percent Irish. I had no idea. I included that imagery in the print that I created. What I find amazing is that your family can tell you about a few generations back, but your DNA goes back thousands of years.”

Participants brought their design concepts into the studio, and with some instruction, traced them onto linoleum blocks and carved the designs. During their time in the studio, each also had the opportunity to share stories of their heritage. Then they inked their block and made a print. Master printmaker Jill Lerner created a matrix of all 12 images, which were planned to link to each other in one large group print.

Love’s mother was English, his father African American. Love’s design incorporated both his English and African American heritage — one with a design of a teacup, the other with African adinkra symbols typically used in fabrics and pottery among the Akan peoples of Ghana. In the finished print at right, Love’s is the center image in the  third row from the top.

Framed copies of the composite print were presented to Bush and Love.

Says Bush, “It was nice, getting together with members of the team. Each of us had to research their background, and tell everyone their story. The composite print illustrates it — no matter where we came from, we are all connected.”

Discussions are already underway  regarding the possibility of offering the workshop to other departments.