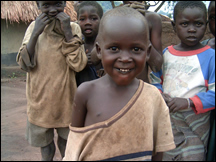 Upon their arrival in the Ugandan capital of Kampala on Jan. 5, Father Jenkins and a Notre Dame contingent will be able to visit the Mpigi-area community near Lake Victoria that will be Notre Dames co-partners in NDMDI.

There, says Rev. Robert Dowd, C.S.C., a Notre Dame Africanist and political scientist, they will meetthe real development expertsthe people who struggle for survival every day.

Notre Dame is the first university after Columbia, home of economist and Millennium Project founder Jeffrey Sachs, to embrace the Millennium Village project. The plan is to reduce extreme poverty, disease and hunger by 2015, community by community, by encouraging comprehensive advances in agriculture, education and health initiatives that lead to a sustainable social and economic entity.

The project prescribes a set of science-based, proven and practical interventions and a five-year timeframe. What a university like Notre Dame brings to the table is fiscal resources and high-level professional supports: surveys, scientific and engineering expertise, and empirical evidence of successful practices. But at its heart, the project supports grassroots responses. The appeal of the Millennium Village movement, says Father Dowd, is that it aims to empower a people who he already knows to be beautiful, resilient and hopeful.

It gives us a chance to learn the real lessons of human development,says Father Dowd, who is directing the project.Part of the mission of Notre Dame is promoting solidarity with people across the world, to recognize people all over the world as our brothers and sisters and not to let boundaries of any kind prevent us from reaching out and learning from each other.

Progress on the project has been rapid since Father Jenkins appointed Father Dowd, who then recruited Timothy Lyden, a 2002 graduate, as assistant director. On the home front, Father Dowd finds an encouraging readiness.

Faculty research and scholarship on Africa is on the upswing. Student interest in Africa, from internships and research projects to on-campus fundraisers and awareness initiatives, is active and passionate, he says.

Familiar with Notre Dame through an almost five-decade presence of the Order of Holy Cross, Ugandans are enthusiastic about the Universitys participation, Father Dowd adds.

During fall, Father Dowd and Lyden began building relationships with the Archdiocese of Kampala and with Uganda Martyrs University, which is close to the area where the NDMDI partner village is located. Such relationships are being encouraged by the Millennium Projects in-country representative, Ugandan native Johnson Nkuuhe, who is involved in selecting Notre Dames village partner.

The earliest Millennium Project village opened in western Kenya in 2003. The NDMDI village will be the second in Uganda, and Lyden carefully toured both the original Kenyan site and Rihiira, the Ugandan Millennium village. There he encountered the rapid progress that can be made, such as the organization of a school lunch program from crops donated by villagers, as well as examples of extreme poverty. Fresh, available water is a revelation in these villages, Lyden found.

Although still forging a blueprint for NDMDI, Father Dowd foresees a project that encourages student reflection on human development at the residence hall level; faculty, graduate and undergraduate research, and some level of alumni participation. This initiative should also impact Notre Dames classrooms, he says.