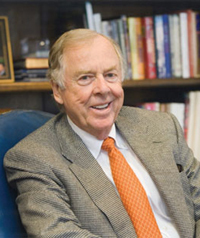 Energy executive T. Boone Pickens will conduct a town hall meeting to discuss his Pickens Plan for U.S. energy independence from imported oil at 5 p.m. Oct. 26 (Monday) at the DeBartolo Performing Arts Center at the University of Notre Dame.

Sponsored by the Mendoza College of Business and the Office of the Provost, the talk is a free but ticketed event that is open to the campus and local communities. It will include a 30-minute presentation by Pickens, followed by a 30-minute question-and-answer session. Tickets will be distributed on a first-come, first-serve basis beginning at 3 p.m. Oct. 26 at the performing arts center.

“We look forward to hosting Mr. Pickens and learning first-hand of his ideas pertaining to alternative forms of energy,” said Carolyn Y. Woo, Martin J. Gillen Dean of the Mendoza College of Business. “Mr. Pickens is a forward thinker on energy, and we are eager for Notre Dame students to engage him on this important subject.”

Launched in July 2008, the Pickens Plan is a U.S. energy policy proposal that promotes alternatives to oil, including natural gas, wind power and solar energy. Pillars of the plan include:

A graduate of Oklahoma State University, Pickens began his career with Philips Petroleum. In 1954, he founded Mesa Petroleum, which by the 1980s was one of the largest independent oil companies in the world. In the mid-1990s, he founded BP Capital, which operates energy focused commodity and equity funds, and Clean Energy, the largest provider of vehicular natural gas in North America.