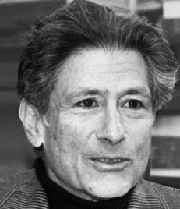 A commemorative symposium honoring the life and literature of the late Edward W. Said, a prolific author and leading advocate in the United States for the Palestinian cause, will take place at 5 p.m. Thursday (Oct. 7) in Room 129 DeBartolo Hall at the University of Notre Dame. The event is free and open to the public.

“An Exemplary Intellectual: A Tribute to Edward W. Said” will feature Paul Bové, professor of English at the University of Pittsburgh and former colleague of Said, who has written extensively on the life and work of the author and activist.

Born in 1935 in Jerusalem – then part of British-ruled Palestine – Said was raised in Egypt and moved to the United States to further his education. A world-renowned scholar, writer and critic, he spent most of his academic career at Columbia University. His widely read book “Orientalism,” published in 1978, led many of the Wests intellectuals and policy makers to re-examine their perceptions of the Islamic world.

Said was consistently critical of Israel for its policies regarding the Palestinians. His outspoken stance made him many enemies, and in 1985 his university office was set on fire.

Deane once described Said as “that rare figure: a truly public intellectual who has a powerful influence within the academy and also a potent public presence. Hes a very brilliant reader, of both tests and political situations.”