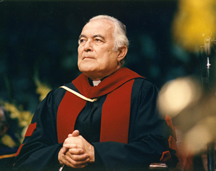 Open to members of the Notre Dame, Saint Marys and Holy Cross communities, the event will begin with a presentation ofGod, Country, Notre Damea documentary that details the life of Rev. Theodore M. Hesburgh, C.S.C., president emeritus of the University, from his childhood days through his service to popes, presidents and Notre Dameand conclude with a question-and- answer session with Father Hesburgh.

Father Hesburgh served as Notre Dames president from 1952 to 1987, directing the Universitys rise to national prominence in research, scholarship and teaching. His many awards include the Congressional Gold Medal, the highest honor awarded by Congress, and the Medal of Freedom, the nations highest civilian honor. He has received 150 honorary degrees, the most ever bestowed on one person.

Father Hesburgh has played an active and influential role in national and international affairs over the past half century. He has held 16 presidential appointments that involved him in virtually all major social issuesincluding civil rights, peaceful uses of atomic energy, campus unrest, treatment of Vietnam offenders, and Third World development and immigration reform. Justice was the focus of many of his outside involvements. Perhaps most notably, he was appointed a charter member of the U.S. Commission on Civil Rights in 1957 and chaired it from 1969 to 1972.