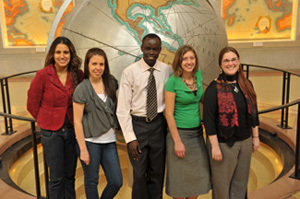 Five University of Notre Dame peace studies master’s students who developed an innovative proposal to advance peace in Colombia will present their recommendations to a panel of experts at the United Nations headquarters in New York on Friday (April 9).

“When you work on an academic project, you always have this dream of creating something that becomes real outside of the university,” Holguin said. “We feel very privileged to present our ideas and meet so many people in policymaking and peacebuilding. It’s an opportunity to show the world what we can really do.”

The students’ project, “La CARA de la Paz,” is a detailed plan for a new phase of Colombia’s disarmament, demobilization and reintegration (DDR) process, which focuses on reintegrating more than 40,000 former combatants from paramilitary and guerrilla groups. The students’ plan calls for Colombia’s existing DDR resources to be used for inclusive projects that promote peaceful co-existence and reconciliation among all members of the community, including the victims of the conflict.

“In a war that has gone on for nearly 70 years, we’re not talking about victims and perpetrators anymore,” said Snider. “Former fighters and victims all live next door to each other and need a way to transcend their war identities. If everyone can work on common goals and benefit collectively, there is less reason to take up arms in the future.”

The roots of the project go back to a class the five students took together in 2009 with John Paul Lederach, professor of international peacebuilding, who asked students to form teams and work together to map out one major world conflict. Last fall, Notre Dame’s Kroc Institute for International Studies was invited to participate in the SPIRIT competition. After hearing about the competition, students decided to turn their academic presentation into a proposal. A flurry of transatlantic e-mails ensued, since the students were in Uganda, South Africa and the United States pursuing their internships at Kroc field sites.

This week at the U.N., the students will join other teams of students from around the world presenting creative plans for alleviating violence and suffering in the Afghanistan/Pakistan border region, Colombia or Israel-Palestine. Experts will work with the students to refine their plans and prepare an implementation strategy. In keeping with SPIRIT’s philosophy of “open-source peacebuilding,” the students’ proposal will be available for any person or group who wishes to draw from it, adapt it or implement it.

“This project has been a great way to ‘challenge theory with practice,’ which is what the Kroc Institute expects of us,” Snider said. “We took what we had learned and put it in a project that would really work in the world.” Holguin, who has worked as an analyst and technical advisor for the government of Colombia, said she hopes the plan “could be a model or inspiration for other DDR processes around the world and even, we hope, a real contribution to Colombia.”