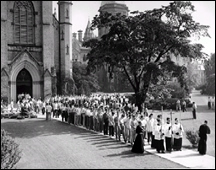 Revising a tradition from earlier times, a Eucharistic Procession will be held at the University of Notre Dame at4 p.m.Saturday (April 16) immediately outside the Crypt of the Basilica of the Sacred Heart. The procession will follow a special Mass celebrated in the Crypt at3 p.m.All students and local residents are invited to attend this unique celebration of the Catholic faith.

Once a yearly event at the University, Eucharistic processions through campus fell out of practice in the years following the Second Vatican Council. The traditions revival reflects a renewed interest in classical devotions to the Sacrament of the Eucharist among Notre Dame students, according to organizers. By honoring the consecrated host, these devotions stress the Catholic teaching that Christ is truly present in Eucharist.

In addition to reaffirming an ancient belief, however, students also want the procession to emphasize a more recent phenomenon – cultural diversity on campus. As an expression of unity, special blessings will be held throughout the procession according to various cultural traditions.

Benedictions are being organized according to Filipino, European and Latino customs,said junior Richard Hinkley, president of Children of Mary.We even hope to find a priest to say Benediction in Kiswahili or some other African language.

The processions multicultural services are especially appropriate for an event commemorating the Eucharist, which often is calledthe sacrament of unity.

Although supported by the Universitys office of Campus Ministry and approved by the local bishop, the procession has been primarily organized by students.

We began this procession as a way of bringing the popes call for a new evangelization to this campus in an ancient but exciting way,senior Daniel Rober said.

Half a dozen student groups are collaborating on the event.

Eucharistic processions, often calledCorpus Christiprocessions, have a long history. They began with the establishment of a feast in honor of the Eucharist in the 13 th century. The practice was heavily criticized by the Protestant Reformation of the 16 th century, and reformers with different beliefs about the Eucharist soon ended the celebrations in much of northernEurope. Catholics, however, continued them with renewed zeal, and towns often competed to have the most elaborate or well-attended processions on the holy day ofCorpus Christi.In recent years enthusiasm has cooled in some places, but these processions remain especially popular throughout Latin America and southernEurope.

Given the recent death of Pope John Paul II, the student organizers say the procession has become even more significant. The pope had long encouraged such acts of devotion to the Eucharist, reviving the tradition through the streets ofRomeearly in his papacy. During this year, which he proclaimed theYear of the Eucharist,the pope called for similar revivals throughout the world. He promoted the practiceas an expression of our grateful love and as an inexhaustible source of blessings.During the Saturday event, his legacy will be remembered in a special way.

A rain date of April 23 has been set for the procession.