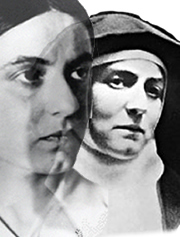 A group of University of Notre Dame students is hosting a two-day conference to examine the manner in which contemporary culture imperils the dignity of women and to describe the vocation of women in the modern world.

The conference, entitledThe Edith Stein Project: Redefining Feminism,will be held Friday and Saturday (Feb. 10-11) in McKenna Hall.Rape, domestic violence, abortion, eating disorders, and the plight of female migrant workers will be among the topics discussed by a variety of speakers, including Alasdair MacIntyre, senior research fellow in Notre Dames Center for Ethics and Culture; Rev. John A. Coughlin, professor of law in the Notre Dame Law School; Cynthia Mahmood, associate professor of anthropology at Notre Dame; Laura Garcia, professor of philosophy at Boston College; Michael Scaperlanda, professor of law at the University of Oklahoma College of Law; and Deirdre McQuade, pro-life spokeswoman for the United States Conference of Catholic Bishops.

BornOct. 12, 1891to a Jewish family inBreslau,Germany, Edith Stein studied philology and philosophy at the Universities of Breslau and Goettingen and earned a doctoral degree in philosophy from theUniversityofFreiburg, where she was a friend and collaborator with Edmund Husserl, the founder of phenomenology.She converted to Catholicism when she was 30 years old and 12 years later entered the Carmelite convent inCologne.Fleeing persecution, she moved to a Carmelite convent in Echt,Holland, in 1938 but was arrested by the Nazis in 1942 during a nationwide retaliation following the Dutch Catholic bishopsdenunciation of the deportation of Jews and the expulsion of Jewish children from the Catholic school system.She died atAuschwitzonAug. 9, 1942.Known in the Carmelite order as Sister Teresa Benedicta of the Cross, Edith Stein was canonized, or proclaimed a saint, by Pope John Paul II in 1998.

The conference will close with a Mass at5 p.m.Saturday in the Basilica of the Sacred Heart.Bishop John M. D’Arcy of Fort Wayne-South Bend will be the presiding celebrant.