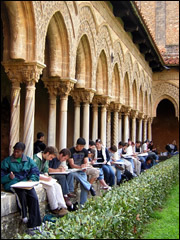 Although he is a lover ofFranceand its culture today, when Christian Moevs was growing up inNew Jerseyin the late 1960s and early 1970s, the Italian side of him was overwhelmed byAmericas exclusive love of things French:Everything had to be chic.Even the word is French. Italian meant pizza, Mafia and cobblers. Pasta was this American-made glue.

Colleen Ryan-Scheutz, Moevscolleague in the department of Italian languages and literature, is also of Italian descent. As a Notre Dame undergraduate in the late 1980s, she majored in French and government. While studying in theAngers,Franceprogram for a year, she says,I went to visit my Italian relatives and woke up: French is beautiful but why havent I taken an interest in Italian?

Today Moevs, an associate professor, and Ryan-Scheutz, Scholl II Professor of Romance Languages and Literatures, and their faculty colleagues are riding the crest of a new wave of passion for the Italian language. Or, more accurately, they are trying very hard to keep ahead of it.

Its a national trend, but one that Notre Dame may be experiencing more intensely than other institutions. Collegiate Italian language study grew 26 percent between 1998 and 2002compared to a 13.7 percent increase in Spanish, according to a report by the Modern Language Association. In spring of 1997, 180 Notre Dame students were studying Italian. In fall 2004, that number had increased to 438.

Italian is a popular choice for satisfying theCollegeofArtsand Lettersthree-semester language requirement. But higher-level classes are also experiencing enrollment increases. The introductory literature course Survey of Medieval and Renaissance Literature has grown from three students in 1994 to 28 in fall 2005.We even have native Spanish speakers enrolling in Italian,Moevs says.

Spanish, acknowledged as the unofficial second language of theUnited States, has the highest enrollment among Notre Dame foreign language programs. But reinforcing the notion that Italian is becoming the European language to study, Notre Dames Italian international studies options are the most sought-after programs in a non-English speaking country. To the dismay of Kathleen Opel, assistant director of International Studies, they also have the greatest turn-away rate. Only about half of applicants can be accommodated in the semester-long programs, says Opel. (The largest program, in conjunction withJohnCabotUniversity, accommodates up to 70 students; Architecture administers its ownRomeprogram, which brings another 60 to 70 students toRomeeach year.)

For one thing, saysRyan-Scheutz,Italyand things Italian are fashionable in theUnited States. Think Papa Vinos. Think cappuccino (You can get cappuccino – well, a form of it – at practically any gas station in town,Moevs marvels. In the 1970s, there was only one place in all ofManhattanwhere he could find the frothy beverage.) Think great shoes, clothing and interior design. ThinkTuscany, as in the half-dozen books Frances Mayes has dedicated toItalysinceUnder the Tuscan Sunwas published in 1996.

As English became the dominant international language, Moevs says, the practical reasons for learning a European language diminished, leading students to study a language for the sake of culture or the beauty of the country. And even in Europe, he saysItalyis a mecca. Everyone has a good time inItaly.

We hear students talk about their ethnic background. Grandma making ravioli,says Lesley Sullivan, an International Studies program coordinator who oversees a language-intensive option inBologna.But I think, practically speaking, they have the option of taking international business, history of the European Unioncourse credits accepted by departments other than romance languages and literatures.

Students add that while few studied Italian in high school, starting a new language from scratch is not a deterrent.

Its a welcome break to the limited selection that is offered in most high school language classes,says sophomore Shannon Wimp, who was inRomeduring the excitement of the papal changeover during spring semester. She also credits avibrantfaculty that gives students incentive to continue studying and to talk up the program among fellow students.

Ryan-Scheutz has introduced an annual theater project, producing an Italian-language play that this year sold out all three performances. The department also takes full advantage of Italian film, trips to the opera inChicago, and online resources that show Italian television commercials. It even organizes student soccer games.Each student obviously has his or her own reasons for choosing a language,adds Wimp,but in my opinion the Italian department has been the most effective in creating a department that students recognize and in which they want to be involved.

If the momentum continues, Moevs says he is hopeful the program, in conjunction with International Studies, will be able to broaden the opportunities for students who want to become bilingual in Italian by taking an immersion program like the one inAngers,France. There, classes are taught in French and the very purpose is to become bilingual.