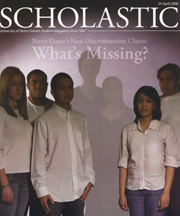 Based on excellence in content, writing and editing quality, photography, art and graphics, layout and design and overall concept, the award was presented to 10 university news magazines. The New York Times Magazine, which judged this year’s contest, selected finalists from a pool of 78 entries.

Since 1927, the Pacemaker has been the highest honor available to ACP members and today is considered one of the most prestigious awards in collegiate journalism. The Pacemaker winners and finalists were recognized at the ACP/College Media Advisers National College Media Convention in Kansas City this month.

The judges commented on the ACP Web site that Scholastic is"good, varied and readable, and especially impressive for its frequency."

Founded in 1867, Scholastic is one of the oldest continuously published student magazines in the United States. An activity of the Notre Dame Office of Student Affairs, Scholastic has a staff of approximately 50 students that produces bi-weekly issues throughout the academic year. The magazine began publishing in full color last year for the first time in its 140-year history. It is printed by Ave Maria Press.

The ACP is a division of the National Scholastic Press Association, a non-profit education organization that strives to educate and recognize the work of student journalists, to improve the quality of student media and to foster careers in media.