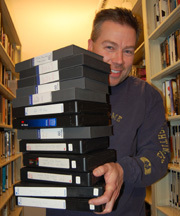 A lot has changed in the world of filmmaking since Notre Dame’s first Student Film Festival was held in 1990. Ted Mandell would know; after all, he’s the guy who put the inaugural event together.

“I got the idea because when I was an undergrad here, we never had a public screening of our work,”says Mandell, a 1986 Notre Dame graduate who teaches film and video production in the Department of Film, Television and Theatre (FTT).“At the time we only had two production courses and any student who wanted anything in the festival, we put it in. I think the total running time was like three hours long.”

The 20th annual Student Film Festival will be shorter (about 110 minutes) when it runs Jan. 22 to 23 in the Browning Cinema of the DeBartolo Performing Arts Center, but still packed with the same creative energy that sparked Notre Dame’s budding filmmakers to action two decades ago.

Filmmaking technology has undergone a major renovation in 20 years. FTT students have gone from shooting on clunky æ"videotape and S-VHS to mostly digital, although advanced film students still shoot on 16-mm black and white because, as Mandell says, it’s important for them to"learn about actual celluloid."

The filmmakers themselves also have gone a long way since that first three-hour extravaganza. Mandell can rattle off dozens of names of FTT alumni who are now firmly planted in the business, such as noted screenwriter Stephen Susco, a 1995 graduate whose entries in early festivals included a short feature about a dispute over the last bowl of Jell-O in one of Notre Dame’s dining halls.

The festival itself has grown from about 50 people who attended the first event to some 1,200 who will enjoy this year’s six screenings of what is now traditionally a sold-out affair. Since the first event, the number of FTT production courses has doubled to four with some 60 students participating.

Amid all this change, one thing has remained constant, if you ask Mandell.

“For students it comes down to writing a script, having something worthy of shooting,”he says.“The storytelling and the art of filmmaking are what’s important to us.”