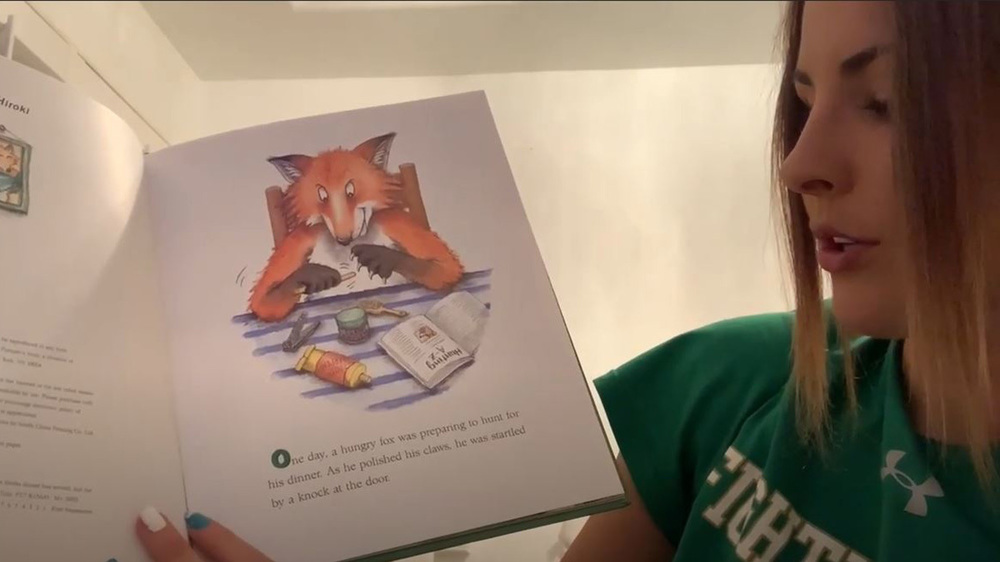 In a typical year, each of the University of Notre Dame’s 26 varsity sports teams attempts to host a signature service event in keeping with the five principles of Student Welfare and Development: education, service, leadership, relationships and diversity.

This is no typical year, of course.

Campus has been quiet since March, when dorms closed and classes moved online because of the coronavirus. Things won’t begin to return to normal until August, and then only with strict measures in place to slow or prevent the spread of the virus among students, faculty and staff. It’s unclear when athletics will resume.

In response, the Student-Athlete Advisory Council, with support from student Welfare and Development, recently launched Fighting to Read, Fighting to Feed, an online service project aimed at promoting literacy and combatting hunger during the pandemic in partnership with local educators and Feeding America.

This is how it works:

Student-athletes record themselves reading children’s books to local students in grades K-4 and then post the videos to Instagram along with a donation sticker for Feeding America, a nationwide network of more than 200 food banks, including the Food Bank of Northern Indiana.

They then tag other student-athletes and challenge them to do the same.

The students also upload the videos to a shared Google drive, where Student Welfare and Development can then share them with local educators, and thus students, from South Bend, Mishawaka, John Glenn, Penn-Harris-Madison and Fort Wayne-South Bend Diocese Schools and the Elkhart and St. Joseph Counties Head Start Consortium via a specially created “Fighting to Read, Fighting to Feed” YouTube Channel.

The project serves a dual purpose as it relates to the coronavirus. It promotes literacy among students whose school years have been cut short by the virus, and it contributes to food security at a time of rising unemployment and worrisome disruptions in the food supply.

About 70 student athletes have participated in the project, representing rowing, cross country, track and field, hockey and lacrosse, among other sports. That includes about five to 10 student-athletes from other schools, including other ACC schools.

Camryn Dyke, a midfielder on the women’s soccer team and the team’s representative on the Student-Athlete Advisory Council, organized the project with Collin Stoecker, program coordinator and director of community service for Student Welfare and Development, a division of Notre Dame Athletics focused on the total development of student-athletes: mind, body and spirit.

A rising senior, Dyke said she wanted to incorporate social media into the project “since everyone is online right now and trying to stay connected,” and since student-athletes tend to attract large followings online.

“It was a way for us to reach a lot of people and help at the same time,” said Dyke, a management and consulting major from Littleton, Colorado.

Dyke enlisted her sister, a women’s soccer player at Penn State University, to participate in the project as well.

“We dug through our old boxes in the basement and found our old childhood books together,” Dyke said. “I read ‘My Lucky Day’ about a pig that outsmarts a fox that’s trying to eat it.”

Dyke’s video, which runs about four-and-a-half minutes, generated $200 in donations for Feeding America on Instagram. It’s been viewed more than 60 times on YouTube. The athletes post the videos to Instagram as so-called “Stories,” meaning they disappear after 24 hours.

“It’s awesome to see what these student-athletes are doing,” said Stoecker, a former pitcher on the Fighting Irish baseball team. “I’ve never met such a selfless group of people.”

Stoecker said that in addition to local educators, he’s been sharing the videos with the American Literacy Association and with the elementary coordinator for his hometown school district in Tennessee.

For Head Start, the project is more or less an online version of an existing program in which student-athletes read to kids at Studebaker School, one of three South Bend schools in the local head start consortium, every Friday during the school year.

“This made a huge contribution toward helping parents,” said Kathy Guajardo, executive director of the Elkhart and St. Joseph Counties Head Start Consortium. “They were able to discover what books were out there that children like, and can maybe go to the library now and check them out.”

Guajardo said that in addition to Head Start families, she’s been sharing the videos with her grandson in Wisconsin, with local teachers for use in e-learning and with the Department of Health and Human Services, the federal agency that oversees Head Start, as an example of outreach during the pandemic.

Such widespread circulation has been gratifying, Stoecker said.

“The whole purpose of this is to continue to put student-athletes in positions to be positive role models,” he said, “So it’s been really cool to see so many educators get behind this.”