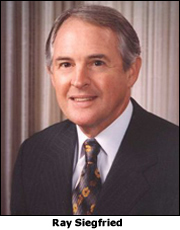 The University of Notre Dame’s Division of Student Affairs recognized four outstanding seniors with student leadership awards at a banquet held on campus this week.

The inaugural Ray Siegfried Award for Leadership Excellence , established this year in memory of the alumnus and University Trustee who died in October after a long battle with ALS, was presented to Daniel Carey, a political science and economics major from Santa Rosa, Calif. The Siegfried Award recognizes a Notre Dame senior who exemplifies the qualities for which Siegfried was known, including leadership, generosity, devotion to the Catholic faith and participation in athletic programs.

Carey currently serves as a resident assistant for Notre Dame’s Siegfried Hall, of which he also is a past president. He has been actively involved in numerous athletic arenas, including an internship for the National Football League in New York City, five summers as leader of a youth baseball league for the San Francisco Giants, and service as a student manager for Notre Dame athletic programs. Carey also worked as a parliamentary research assistant at the House of Commons during a semester in London and served as a campaign coordinator for a California councilman and as a volunteer firefighter in South Bend.

The Rev. A. Leonard Collins, C.S.C., Award , given to a graduating senior who has made a substantial personal effort to advance the interests of Notre Dame students, was presented to David Baron, a political science and economics major from Kankakee, Ill.

Notre Dame’s student body president during the 2005-06 academic year, Baron also served as freshman class president and chief executive assistant to the student body president. Through his work in student government, he has participated in numerous University committees to examine such issues as diversity, residential life and relations between students and the South Bend community, and has served on the Student Affairs committee of the Board of Trustees.

The John W. Gardner Student Leadership Award , presented to a graduating senior who exemplifies the ideals of Notre Dame through outstanding volunteer activities reaching beyond the University, was given to Peter Quaranto, a political science and peace studies major from Franklin, Mass.

Quaranto has worked as a volunteer for such organizations as South Bend’s Center for the Homeless, the Take Ten conflict resolution program in South Bend schools, and My Brother’s Keeper, an organization that helps urban poor families in Brockton, Mass. He spent the summer of 2004 in Phnom Penh, Cambodia, documenting stories of children infected with HIV/AIDS, working with youths in the areas of peace-building and conflict resolution, and teaching English. He also is the co-founder of Uganda-CAN, a lobbying group that works toward a comprehensive resolution to the ongoing war in that country, where Quaranto completed a semester abroad to study the conflict.

The Denny Moore Award for Excellence in Journalism , named in honor of the University’s late associate vice president for public affairs and communication and presented to a senior who exemplifies the qualities for which Moore was known, including personal integrity and character, commitment to Notre Dame and writing ability, was given to Claire Heininger, an American studies major from Ann Arbor, Mich.

Heininger served as the 2005-06 editor in chief for The Observer, Notre Dame’s daily student newspaper. Under her leadership, the paper has expanded its focus from primarily chronicling daily news to also incorporating more in-depth reporting, including comprehensive coverage of the death of Pope John Paul II last year and extensive reports on student government elections. Heininger also completed an internship with the Chicago Tribune.