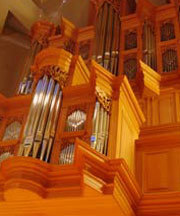 Notre Dames $64 million Marie P. DeBartolo Center for the Performing Arts opened to much acclaim during open houses last weekend for the campus and local communities.p. The campus celebration Friday (Sept. 17) began at 4 p.m. when the Universitys marching band led a parade from Washington Hall – the former home for many musical and theatrical productions – to the new home in DeBartolo. Faculty from the Departments of Music and Film, Television and Theatre – many dressed in Shakespearean and other costumes – trailed the band in a march south, through the Main Quad and down Notre Dame Avenue.p. Upon arriving at DeBartolo, the band gave a short performance that included “Celebration Fanfare,” a piece written by Kenneth Dye, director of bands, in commemoration of the new center. After doves were released into a blue sky over the center, the Irish Guard marched into the building to officially begin the open house. The weekends activities culminated Sunday evening (Sept. 19) with a performance by trumpeter Wynton Marsalis and the Jazz at Lincoln Center Orchestra.p. On both Friday and at a community-wide open house Sunday, visitors to each of the five performance venues in DeBartolo watched a variety of presentations by students and faculty.p. Gail Walton, director of music for the Basilica of the Sacred Heart, led the Notre Dame Liturgical Choir in a brief concert in the Leighton Hall. Afterwards, she was enthusiastic.p. “That room is a state of the art, fabulous facility,” she said.p. She added that she had heard various groups and ensembles over the past weeks, as the hall was tested for acoustics, and it “worked beautifully” for all types of music.p. Students were equally enthused.p. Senior Lena Caligiuri, a theatre and English major, told The Observer: “We feel really lucky to have at least one year in this building. Its just so far beyond the resources we have a Washington Hall.”p. Architects also offered positive reviews of the 151,000-square-foot building, which stands on the south end of the campus near the main entrance.p. Tim Wall, president of the northern Indiana chapter of the American Institute for Architects, told the South Bend Tribune that the collegiate Gothic look of the DeBartolo Center is “very successful.”p. He added, “Looking up the quad, there are other buildings that kind of shout, Hey, look at me.This building is kind of quiet. I think thats the right approach.”p. The DeBartolo Center is the first performing arts facility built at Notre Dame since Washington Hall opened in 1882. The center was underwritten with a portion of a $33 million gift to Notre Dame in 1989 from the late Edward J. DeBartolo, a 1932 graduate of the University, in honor of his wife, Marie. The center was designed by Hardy Holzman Pfeiffer Associations of New York City and Los Angeles, and construction began in September 2001.p. The performance venues in DeBartolo are:p.  The 900-seat Judd and Mary Lou Leighton Concert Hall, underwritten with a gift from South Bend civic leader and philanthropist Judd Leighton and his late wife, which will be used primarily for music performances;p.  The Patricia George Decio Mainstage Theatre, underwritten by Notre Dame Trustee Arthur J. Decio in honor of his wife, which seats 350 and will be a home for undergraduate theater, touring theater companies and Shakespeare at Notre Dame, as well as lectures and dance events;p.  The Regis Philbin Studio Theatre, underwritten by the popular television host and 1953 Notre Dame graduate, a stageless “black box” (where the spatial relationship between actors and audience is completely flexible), which seats 100 and will be used primarily as an undergraduate theater facility;p.  The Michael Browning Family Cinema, underwritten by the family of Browning, a 1968 graduate, a 200-seat theater with 35mm projectors and a state-of-the-art sound system that will show films for instructional and entertainment purposes for students and the general public;p.  The Chris and Anne Reyes Organ and Choral Hall, underwritten by Notre Dame Trustee Chris Reyes and his wife, which features a hand-crafted organ of some 2,550 pipes, and is designed to seat 100 guests and serve Notre Dame’s program of sacred music. The organ was funded by a gift through a charitable remainder trust from the late Marjorie M. O’Malley, a member of Notre Dame’s Advisory Council for the College of Arts and Letters from 1980 to 1986.p. The DeBartolo Center also is home to Notre Dame’s Department of Film, Television and Theatre and includes classrooms, editing studios, a recording studio, a scene and prop construction shop, a sound stage, a costume shop, a computer-aided design lab, a lighting lab, and music and theater rehearsal halls. In addition, all five performance spaces are designed to support academic instruction.p. The centers first season will include performances by the Marcus Roberts Trio (Sept. 24), Second City Comedy (Oct. 22) and the New York Philharmonic (Feb. 3). A complete schedule is available on the Web at http://performingarts.nd.edu .p. p.