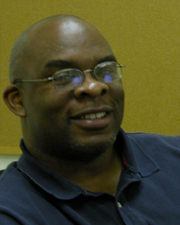 In 1992, he surprised coach Lou Holtz by making a seemingly impossible catch of a two-point conversion pass in the back of the end zone, securing an Irish win over Penn State with only 20 seconds left in the game.

That same season, he surprised Irish fans when he rushed for 1,343 yards, knocking one of the famed Four Horsemen from the record book and coming within inches of breaking the yards-per-carry record set by George Gipp in 1920.

As a running back for the Washington Redskins in 1993, Brooks became the first rookie to lead the team in rushing in 18 years. This may have shocked Washington fans, but the Irish faithful had learned to expect the unexpected.

Eleven years after leaving Notre Dame to play professional ball, first for the Redskins and then for Tampa Bay, Reggie Brooks has returned to Notre Dame to pursue another love: computers.

Last February, Brooks, his wife, Christina, and four children relocated to South Bend when he was offered a full-time position with the Office of Information Technologies (OIT) as an administrator of production systems. A management information systems major as an undergraduate, Brooks is a configuration management specialist.

“It was a funny thing how it worked out,” Brooks says. “I had applied for a position here several months before, and then didnt really think much of it. Then, a few weeks prior to getting a call about the position, my wife and I were discussing possible places to raise a family.” Three weeks later, Brooks heard from OIT, and the move just seemed to make sense.

Both he and his wife are nostalgic for Notre Dame, having met here as students. They were both optimistic about the opportunity to raise their family in a community with such strong traditions.

Brooks is immersed in the Renovare Project, the campuswide replacement of the Universitys information systems. A few of his responsibilities include verifying changes and defining processes that allow OIT to track changes to the system more efficientlyall to ensure that the University is able to make a seamless transition to the new system.

Surprise, again: His office has only a football calendar to suggest Brookspast. There is not a piece of college or pro memorabilia to be seen. A slot in the U93 radio post-home-game show is where Brooks reconnects with his past.

If his pro career ended prematurely, Brooksobservations indicate it was getting time for him to move on. “Football is a business,” Brooks says. “Even college ball is becoming a business. You lose a lot of joy in playing because of it. It has hurt the game in my mind.”

These days, Brooksmemories about his Notre Dame experience lean toward soulful considerations. He believes that the values he learned while he was here have helped him to mature and to move easily into family life and his new career.

“The true spirit of Notre Dame is the people who work here, the professors, the administrators, the whole staff,” he said. “And thats really the reason Im so excited to be back. When I was here before, I took a lot of that for granted.”