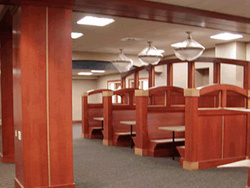 p. p. _"Be a little careful about your library. Do you foresee what you will do with it? Very little to be sure. But the real question is, ‘What it will do with you?’ You will come here and get books that will open your eyes, and your ears, and your curiosity, and turn you inside out or outside in."p. —-Ralph Waldo Emerson’s Journals, Sept. 1873

_
p. On Sept. 18, 2003?exactly 40 years after the Hesburgh (then Memorial) Library opened ? Notre Dame’s president emeritus, Rev. Theodore M. Hesburgh C.S.C., blessed the facility’s recently renovated lower level, bringing to an end years of planning and hard work.p. “I can’t think of anything I want to bless more,” Father Hesburgh said as he spoke of the library as holy place that fulfills an ?internal yearning for truth."p. The lower level renovation is actually more of a beginning than an end, with four more renovation phases still to come. The lower level was the first phase, since it was the only place where moveable shelving could be installed to efficiently meet the need for expanded space. The other phases will include renovations and developments of the first and second floors, along with lighting and flooring improvements on the tower floors.p. “We’re thrilled with the outcome of the first step in our vision of creating a great destination for learning and research,” said Jennifer Younger, Edward H. Arnold Director of University Libraries.p. This new interior renovation project accentuates the library’s commitment to learning. With its beautiful study area, complete with new booths, tables, lounge chairs, couches and group study rooms, the lower level has become an immediate favorite for students.p. “The lower level is the quiet study area of the library,” says Kathy Colbert, a stacks management assistant involved in the transfer of materials to the lower level. “Other areas are not as quiet, but the lower level really brings students in.”p. In addition to the study space, the library’s collections of government documents, microfilm and microfiche, and the International Studies Resource centers are among the elements that have been relocated. Other materials from the tower also will move to the lower level, including volumes from the general works, science, medicine, agriculture, military science, engineering and library science. The complete relocation of these materials is expected to take six months.p. Younger is excited about the many positive reactions to the lower level from faculty, students and alumni. Most striking to her is the “wow” effect when people see the renovation for the first time.p. What began as a 200,000-volume library has expanded into nearly 3 million volumes today?just as Father Hesburgh predicted in 1960?and the staff of the Hesburgh Library remains dedicated to housing the expansion.p. Demolition of the original lower level began in October 2001 and was completed the following September. The lower level opened in August.p. In his own speech before the blessing, the University’s Provost, Nathan Hatch, recalled Ralph Waldo Emerson’s thoughts about the power of a library. With its new renovations and sustained commitment to learning, the Hesburgh Library fulfills Emerson’s idea of turning library-dwellers “inside out” and “outside in.”