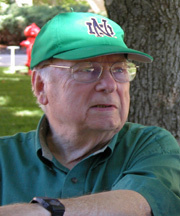 Not counting a former president who works in a building with his own name on the side, the most notable retiree on the Notre Dame campus is probably Dr. Emil T. Hofman, the one-time scourge of first-year chemistry students who became a beloved figure in the transition to co-education at the University.p. The 83-year-old Hofman can be found most weekdays holding court with passersby at a well-shaded bench on the walk between the Main Building and LaFortune. And not just on warm, sunny days either. Hes there nearly every day, including the snowy ones in January. (But he doesnt do rain.)p. “You have to have a plan,” Hofman says of retirement, “even if you plan to do nothing.” True to his word, he can produce a WNDU-TV tape from 1990 in which he predicted that in his retirement, “Ill have a bench on the quad, and thats where Ill conduct my business.”p. For a while, he tried a bench near the backside of LaFortune, but his current perch suits him better. Theres a regular stream of friends, young and old, plus the ones he remembers as he looks down toward South Quad. The buildings in his view have not changed in the 54 years since he first set foot on campus as a grad student.p. p. “I can look down there and see myself and Bernie Waldman (deceased former science dean) or myself and Bob Gordon (deceased former vice president of advanced studies),” he says.p. Though he taught chemistry in the era of an all-male student body, was a World War II veteran in the old Army Air Force, and had three sons, no daughters, Hofman became dean of the Freshman Year of Studies (now First Year of Studies) when co-education began in 1972.p. “It was the most ridiculous appointment of all, because I was the most macho, chauvinistic guy on this campus,” he recalls.p. Lets just say, he adjusted over time, because today it is rare when a female student is not visiting with Hofman at the bench or sharing lunch at the University Club.p. But before you get the wrong idea, he is quick to mention that he and his wife of 48 years, Joan, “are more in love now than we have ever been.” And they travel all over the world, having visited each continent twice in the 14 years since he retired. Next up, in May, is a trip down the Amazon.p. As for advice to others facing retirement, Hofman says, “Dont just go and mold away. Keep active, keep doing what you like to do. Busy is better than boring.”p. He says that at first he missed the “tension” of the workplace – the pressure of deadlines and the clock. But now hes acclimated himself.p. If people wonder “whats that old guy doing, sitting on that bench,” he has an answer: “Im enjoying myself.”p. If not traveling, he arrives each day at 9.30 a.m. of so, parking his car by the Basilica. He ambles over for the 11.30 Mass, has lunch and then logs a few more “office” hours before leaving around 3 or 3.30.p. Some days in winter, he does look a bit uncomfortable, but it will be easier this year. On the weekend of the Michigan game, at the annual lecture he sponsors by one of his former students, Senior Associate Athletics Director Missy Conboy presented him with one of the Notre Dame parkas worn by the Fighting Irish in cold weather.p. And, by the way, there were 496 people who attended the lecture this year, so he not only has the comfort of the parka in retirement, but also the warmth of many friends.p.