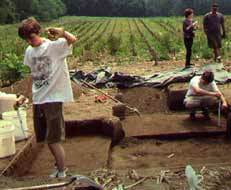 They fly into war-torn regions of Africa, interview terrorists in Central Asia, study the sleeping patterns of mothers and babies, explore the cultures and customs of Latin America and the Middle East, and dig for greater understanding of North America’s past.

These are the members of Notre Dame’s Department of Anthropology, which in just 20 years has become home to a wide array of internationally prominent scholars who have developed an experiential and interdisciplinary program of undergraduate study that is among the most innovative in the nation.

The Anthropology Department was established in 1982, when the six anthropology professors in the Department of Sociology and Anthropology initiated an autonomous program with just 12 undergraduate majors. Now the department boasts 15 full-time professors, aided by visiting and joint faculty members, who teach more than 350 students majoring or minoring in anthropology.p. In addition to teaching, Notre Dame anthropologists are gaining worldwide recognition for their work in biological, archaeological, social, religious and political studies.p. And they’re bringing Notre Dame students along for the ride.p. James J. McKenna, department chair and professor of anthropology, is the nation’s foremost authority on infant and childhood sleep problems, sleep development and breast feeding. A pioneer of behavioral and electro-physiological studies comparing the effects of mother-infant cosleeping with those of sleeping in separate rooms, McKenna has published more than 130 papers and books regarding infant sleep patterns and development and Sudden Infant Death Syndrome (SIDS.) He directs and monitors the Mother-and-Baby Behavioral Sleep Laboratory at Notre Dame, where undergraduate students are directly involved in anthropological study, research and data-gathering. He also brings students to professional conventions, where they participate and present papers or projects, gaining both important insights and introductions even before they graduate.p. “It’s very unusual, what we’re doing with the undergraduates,” McKenna said. “We’re treating them like they’re graduate students. They get their names in abstracts of professional societies. That’s very rare. I can’t think, offhand, of any other programs that do that.”p. The research conducted by other scholars in the department provides students with equally valuable experience in a wide range of anthropological fields.p. Susan G. Sheridan is an associate professor currently involved in several high-profile research projects — studying the skeletal remains exhumed at Qumran, the location of the Dead Sea Scrolls discovery, and from a large Byzantine monastery in Jerusalem. A biological anthropologist, she combines biological data with textual and archaeological records of ancient groups to depict more accurately daily lives of the past.p. Through an annual summer field school based on the Byzantine collection, students work along side Sheridan and other professionals to learn biocultural techniques. The field school, cosponsored by the National Science Foundation and Notre Dame, gives students a “jump start” on their careers and “a real taste of experiential learning,” according to Sheridan, who also cited the excellence of anthropological facilities on campus.p. “Notre Dame has been extraordinary,” she said. “The lab facilities are top notch.”p. In addition to the lab facilities, the interdisciplinary anthropological work on campus is also noteworthy. Professor Mark Schurr aids Sheridan in her research, performing isotopic studies on bones and exhumed materials to reveal further details about research subjects. Such collaboration is common among the faculty members, making the department “a permanently pleasant place to be,” according to Sheridan.p. McKenna agreed, saying, “We all work together and have a great rapport.”p. Schurr directs his own projects when not dabbling in isotopic research with colleagues. A specialist in archaeological chemistry, Schurr studies the ancient populations of the North American Southeast and the Lower Great Lakes region. As director of Notre Dame’s Archaeology Field School, he introduces students to a variety of research methods, including the geophysical survey technique, which is only taught at a handful of other North American schools. Through the program, students are assigned to sites across the United States to study the relations between agricultural intensification and social complexity in populations spanning three millennia, from from prehistoric to historic. But the intricacies of past civilizations aren’t the only subjects studied by Notre Dame anthropology professors and students. During the past year, for instance, the knowledge and opinions of faculty members about current events have been especially sought after by the news media.p. Rev. Patrick D. Gaffney, C.S.C., an expert in Islamic studies and the author of numerous articles on Islamic resurgence, ethnic conflict and inter-religious strife in the Middle East, was frequently consulted by journalists after the terrorist attacks of Sept. 11, 2001. The same was true for Cynthia Mahmood, an associate professor specializing in the cultural contexts of violence who has engaged in extensive face-to-face dialogue with Islamic militants in Central Asia.p. Carolyn R. Nordstrom, like Mahmood, a faculty fellow in Notre Dame’s Kroc Institute for International Peace Studies, conducts research in yet another area of contemporary study ?the political anthropology of peace and conflict on the frontlines of wars in such regions as southern Africa, Southeast Asia, and central Europe. She also studies post-war transformation, including its relationship to organized crime and patterns of development.p. As the department enters a new decade, these and other faculty members have established Notre Dame as an innovator in the field and one of the nation’s premier centers of anthropological scholarship. It is a past and present that bodes well for the future.