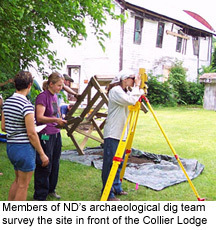 Collier’s Lodge, built in 1879 on the Kankakee River Marsh in northwest Indiana, is one of the few remaining examples of hunting lodges that once were a prominent feature of the areas local economy.p. The marshlands, known then as theEverglades of the North,attracted waterfowl hunters from around the globe during the late 19th and early 20th centuries, with the Collier Lodge hosting notables such as Teddy Roosevelt and Grover Cleveland.p. The marsh was drained and the river straightened in the 1920s, and the once-elite hunting club dried up with it. But during a quick, two-day archeological dig in the area last summer, Notre Dame anthropologist Mark Schurr and a team of students unearthed tangible clues of the areas rich history – artifacts that exceeded their expectations, including pottery pieces dating back 900 years and hand-blown glass from an early 19th-century European settlement.p. I expected a shallow and badly disturbed site,Schurr said of his initial contact with the site.But in 14 years, I have never seen another site like this. It has never been plowed, and earlier layers may be sealed. Its very exciting.p. Schurr and students from his field study summer class, as well as volunteers from the Kankakee Valley Historical Society, returned to the area this week in hopes of uncovering further evidence of prehistoric life on the Kankakee River. According to Schurr, prehistory is defined locally as any time before 1679, the time of the first written history of the area.p. Using probes and other specialized instruments to measure datable layers in the subsoil, Schurr and his team hope to locate concentrations of bricks, packed-earth floors or structural foundations – remnants indicating historic or even ancient settlements.p. According the Kankakee Valley Historical Society records, the river has been the site of fords and bridges for thousands of years – a crossroads for Native Americans, the French explorer René Robert de LaSalle in the 17the century, and 19th-century figures Tecumseh and President Harrison. Schurr notes that objects have been found in the general vicinity that date back 10,000 years.p. Because so many layers of earth have remained undisturbed in the area, Schurr expects to find artifacts from many different time periods including pottery, beads, fishing and hunting items, and evidence of agriculture and diet. The focus on prehistory and early historic layers could result in the discovery of a seasonal residence, which could include beaten earth or poured clay flooring, trash pits, smudge pots for smoking away mosquitoes, or a ring of post holes.p. The importance of context is stressed by Schurr, who explains,We dont want to collect just artifacts. We want to collect artifacts with information about where they came from. Were looking for things that tell a story of life at the Collier Lodge site and we will use those artifacts to tell the story.p. The Northwest Indiana Times contributed to this story.p.