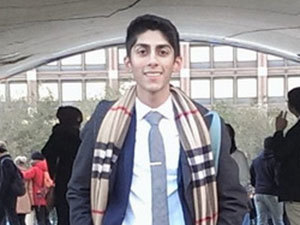 Many Americans have expressed their displeasure at the ugly tone of this year’s unusual presidential election. Prathm Juneja, a University of Notre Dame sophomore studying political science and computer science, and his peers have been working to counteract this tone by encouraging civic discourse at their universities.

Juneja applied and was accepted to participate in College Debate 2016, a nonpartisan initiative that seeks to empower younger citizens in the electoral process. The first-of-its-kind initiative was created by Dominican University of California, a Voter Education Partner of the Commission on Presidential Debates. College Debate 2016 drew on technology and social media to generate discussion of issues important to students and to bring those issues to the attention of the moderators of the presidential debates. The focus was on promoting civil discourse, understanding responsible digital citizenry, and avoiding stereotypes and assumptions while focusing on issues rather than party politics.

Juneja and his 124 fellow College Debate delegates gathered on the Dominican campus in June for a planning and training session.

“At the June event, all of the students had the opportunity to meet for a few days, hear some amazing lectures on civic engagement, discourse and social media, and discuss how we planned on engaging our own student bodies,” Juneja said.

The delegates reconvened at Dominican shortly before the presidential debates began for the 2016 College Convention. The convention culminated with a 90-minute moderated town hall meeting.

“When we got to the town hall, we already knew each other and were able to quickly get to work,” Juneja said. “The premise of the town hall was simple: students, representing schools from across the country, sharing the issues that matter to them most in this election, and the questions they hope the candidates are asked. It truly was an incredible experience. I had the opportunity to spend a few days with some really motivated students, share my own political story in front of millions of viewers on ABC Digital and MTV-U, and discuss politics, both in terms of our own political views and also in terms of our aspirations to bring civic engagement to our college campuses.”

The convention also gave Juneja an opportunity to gauge the direction his peers are leaning leading into the presidential election.

“Obviously, I didn’t have a chance to speak to every delegate, but the information I received closely reflected what one would expect from college-educated millennials,” he said. “Most of the delegates were planning to vote for Secretary Hillary Clinton, or at least leaning toward voting for her, as they were still upset about Sen. Bernie Sanders’ primary loss. That’s not to say there weren’t supporters of the other candidates there; in fact, there were a decent amount of Trump supporters, and many of those delegates were incredibly involved in the campaign and were quite outspoken about their beliefs. There were also a few delegates considering Gary Johnson and Jill Stein, which makes sense given Johnson’s large percentage of support among the youth. Overall, while the support definitely leaned toward Clinton, there was an incredible diversity of views at the town hall, which gave way to some influential political discussions.”

Fresh off his College Debate experience, Juneja is looking to impact the way students have civic discourse at Notre Dame. He is a member of the NDVotes ’16 Take Force and director of National Engagement and Outreach for Notre Dame Student Government. NDVotes is a nonpartisan campaign of the Center for Social Concerns and the Rooney Center for the Study of American Democracy to promote voter education, registration and mobilization. The group fosters engagement in political and civic life among students.

“Student government is by far one of the best mediums through which we can create change at this University, and through National Engagement and Outreach, I and the members of my department hope to make our impact by changing the way we have civic discourse at the University,” Juneja said. “Whether that means having events such a mock debate and mock election, to really spark conversations between students who don’t talk politics as often as we should, or whether it means hosting the New York Times economic reporter Binyamin Appelbaum to bring another perspective to politics, our goal for this semester is to really impact the student body in a manner that gets them excited about politics.”

Juneja notes that as a dual-degree computer science and political science student, he has passions for both innovation and reform.

“I see both my majors as means toward the same end of making a difference,” he said. “Whether that means a pathway that involves technological entrepreneurship or political policy work, I know I want to do all that I can to help serve as many people as I can.”