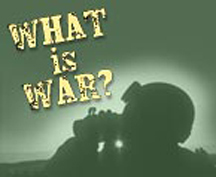 Soldiers, social scientists, war correspondents, just war theorists, military historians, international lawyers and decorated generals – including two former commanders in Bosnia – will meet Sept.13 to 15 (Thursday to Saturday) at the University of Notre Dame for a conference titledWhat Is War?

A clear answer is critical to human rights around the world, according to Mary Ellen OConnell, Robert and Marion Short Professor of Law at Notre Dame and a fellow in the Universitys Kroc Institute for International Peace Studies.

The most basic human rights – the right to life, the right to trial, the right to own property – all depend on whether a conflict is legally definable as war or not,she said.Yet at the moment there is no immutable dividing line between the two situations.
Governments tend to deny that fighting on their territory is armed conflict, OConnell said, instead calling itcriminal activityand claiming that they have it under control.

Yet if the conflict on your territory is not war, then according to international law you have to use law enforcement methods rather than respond with bombs or violence,she said.

In a reversal of this trend, the U.S. government after the Sept. 11, 2001, terrorist attacks began callingwarwhat many would see as crime, OConnell said.

During war, the law changes fundamentally,she said.Under the argument that the U.S. is conducting a global war on terror,people have been killed, imprisoned without trial, had their property confiscated and lost many other rights that could never have been violated in times of peace.

An agenda and list of speakers and biographies are available at http://kroc.nd.edu/events/

The second day of the conference will coincide with the release of Gen. David Petraeusreport on progress since the U.S. militarysurgein Iraq.

The conference, which is free and open to the public, is sponsored by the Mershon Center for Security Studies at Ohio State University, Notre Dames Kroc Institute for International Peace Studies and Notre Dame Law School.

The conference is an outgrowth of a study group formed by the International Law Association, a worldwide organization of international lawyers and law scholars. Under OConnells chairmanship, the study group is charged with addressing the legal challenges raised by the Bush administrationsglobal war on terror.The committees work is expected to have a major impact on the international communitys understanding of the rights and duties of states, organizations and individuals.
For more information: http://kroc.nd.edu/events/