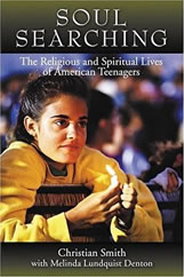 Publishers nominated some 240 titles for this years awards, and judges from the Christianity Today staff chose 22 winners. Top choices were selected for their impact on evangelical life, thought and mission.

Published by Oxford University Press in 2005,Soul Searchingis based on the findings of the National Study of Youth and Religion (NSYR), the largest and most detailed study ever undertaken on the topic. Smith is the principal investigator and director of NSYR, which is funded by the Lilly Endowment Inc.

Smith and his co-author, Melinda Lundquist Denton, a doctoral student at theUniversityofNorth Carolina, illustrate the complexity of contemporary teenage religious life, showing that religion is widely practiced and positively valued by teens, but also de-prioritized and poorly understood by them.

Among the books findings is that American teenagers are far more influenced by the religious beliefs and practices of their parents than commonly thought, and that greater teenage religious involvement is significantly associated with more positive adolescent life outcomes. In broad terms, the book describes a major transformation of faith in this country, away from the substance of historical religious traditions and toward a new faith the authors callmoralistic therapeutic deism.

Specializing in the sociology of religion, Smith joins the Notre Dame faculty thisfall, coming from theUniversityofNorth Carolina, where he served as the Stuart Chapin Distinguished Professor of Sociology.He is the author of several other books, includingMoral, Believing Animals: Human Personhood and Culture,(Oxford University Press, 2003) andChristian America? What Evangelicals Really Want,(UniversityofCaliforniaPress, 2000). Smith earned his doctoral and masters degrees fromHarvardUniversity.