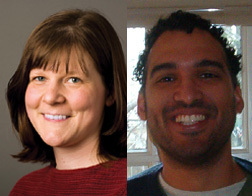 Though not quite the stuff of a Norman Rockwell painting, a husband reluctantly heeding his wife’s request to abandon the couch and go to church is an appropriate scene to depict what two University of Notre Dame sociologists call “one of the most consistent findings in the sociology of religion”: Women are more religious than men. But why?

Jessica Collett and Omar Lizardo, assistant professors of sociology, believe the risk-aversion hypothesis developed by the late Alan Miller and Baylor University’s Rodney Stark is the best explanation. It draws on a considerable amount of data that indicates women aren’t as likely as men to engage in high-risk behavior, such as committing a crime. Miller and Stark applied the same principle to people’s attitudes about faith, arguing that the more prone someone is to follow society’s rules, the less inclined he or she will be to ignore religion and risk losing the supernatural rewards associated with it.

As for why women tend to be more risk averse, Miller and Stark wrote that it may be due to physiological differences between the sexes. However, Collett and Lizardo think there are other forces at work, as well.

In an article published in the June issue of the Journal for the Scientific Study of Religion (JSSR), they present research they’ve completed that explores the topic from a sociological perspective.

“We draw on a theory from criminology, called power-control theory, which suggests there are social roots of such risk preferences,” Collett says, “specifically that in patriarchal homes, there is more control exerted over young women by their mothers, resulting in a distaste for risk compared to men raised in those homes.”

Power-control theory defines egalitarian homes, on the other hand, as those where the mother has a high socioeconomic status, measured in terms of her standing in the workplace, making the family less likely to follow traditional gender scripts. In this environment, one would expect boys and girls to develop attitudes toward risk-taking that more closely resemble one another.

Collett and Lizardo, following a line of inquiry Miller identified but did not pursue, hypothesized that the family structures described by power-control theory could impact the choices women make about religion, based on the assumption that those decisions involve a calculation of risk. To test this idea, they analyzed data gathered from 1994 to 2004 through the National Opinion Research Center’s General Social Survey, focusing on demographic traits as well as church attendance, frequency of prayer and strength of religious affiliation.

“In these egalitarian homes, girls are likely treated more like their brothers … and [as adults] end up with similar rates of religiosity as men,” she says, a finding that implies biology alone can’t be responsible for the discrepancy in the general population. “While we don’t have access to the measures of parental control in this data—and we are only able to look at gender, religiousness and parental socioeconomic status—we use power-control theory’s arguments about the exertion of control to explain why mothers’ increased occupational status results in less religious daughters.”

Titled “A Power-Control Theory of Gender and Religiosity,” Collett and Lizardo’s paper appears in JSSR along with three responses from others in the field.