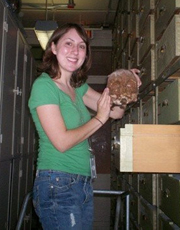 University of Notre Dame seniors Lauren Holcomb and Shannon Mimnaugh interned last summer at the Smithsonian Institutions National Museum of Natural History (NMNH) in Washington, D.C. To gauge their thoughts on the experience, you only need ask them if they would recommend it to other students.

Absolutely,Holcomb says, as she and Mimnaugh break into huge smiles.

Its a reaction that Mark Schurr, associate professor of anthropology, has seen before, as a special partnership between Notre Dames Department of Anthropology and the NMNH places two of the Universitys students at the museum each summer.

Our relationship provides a unique opportunity for both our students and the Smithsonian,says Schurr, the departments chair.We provide highly talented interns who are selected through a competitive application process . . . They offer a chance to work one-on-one with top researchers in various subfields of anthropology, and they help our students see what work life in a world-class museum setting is really like.

Notre Dame is the only university in the world that has established a formal internship program with the NMNH. Interested students apply through the department, with anthropology faculty members reviewing the applications and selecting finalists. The Smithsonian then chooses two students for the 10-week program, both of whom receive $5,000 stipends from the department to help cover their living expenses.

We really want to push student involvement in research and professional development beyond what is typically found at the undergraduate level,Schurr says.

The departments collaboration with the NMNH started in 2003 as an outgrowth of the museums Research Training Program, which exposes students to collections in multiple fields while they pursue research with Smithsonian scholars. In addition to anthropology, interns worked in areas such as geology, botany and zoology.

Beginning with Holcomb and Mimnaugh, however, Notre Dame students now spend the entire internship working in the NMNHs anthropology department, focusing their studies on an area within the field.

For Mimnaugh, this translated into an invaluable 10 weeks worth of research for her senior thesis, which examines foot bones that are thousands of years old.

The collection that I looked at was from Bab edh-Dhra,Jordan, and its from about 3,600 to 3,000 B.C.,Mimnaugh says.Im looking at the effect of stress patterns on the bone and how the bones might be modified by repeated action.

With the help of Susan Sheridan, associate professor of anthropology and her advisor at Notre Dame, Mimnaugh was able to contact Donald Ortner, an NMNH curator in physical anthropology and one of the most prominent figures in the field, before she applied for the internship. After she was accepted, he agreed to be her Smithsonian mentor, and their frequent conversations covered everything from her findings and developments at Bab edh-Dhrato life in general.

He would make sure that I would come in when he was there and that we would talk, even if it was about how I was doing in Washington,Mimnaugh says.It didnt always have to be about research; he wanted to make sure the whole internship experience was good.

Where Mimnaugh went to the museum with her own research to conduct, Holcomb wanted to work on an existing project and explore her interest in biological archaeology. She chose Doug Owsley, director of the NMNHs Division of Physical Anthropology, as her advisor.

I probably saw him for at least two or three hours every day of my internship,Holcomb says.My main project there was helping him do research for an upcoming exhibit . . . [I worked] specifically on bone density of femurs. He would help me out with selecting specimens, give me a hint of what sort of things he wanted in there . . . and we actually took them to the Washington Hospital Center to have them scanned for density.

Like Mimnaugh, she found the time she spent with her mentor to be extremely rewarding.

I was just amazed each day at everything (Owsley) knew,Holcomb says.Hed pick up a chunk of bone and even if it was a fragment of a bone, hed be able to tell me what it was, (whether) it was female, what age it was. I would love to be able to do that.

Since returning to Notre Dame, she has been studying artifacts unearthed during an excavation of a home occupied by an Irish-American family that lived near campus around 1900. Under the guidance of assistant professional specialist Deborah Rotman, who led a field school at the site this summer, Holcomb is examining the patent (non-prescription) medicine the family used.

She will present this research at the Society for American Archaeology meeting in March. Shortly thereafter, Mimnaugh will discuss her thesiswhich incorporates findings from her work at the NMNH as well as at Notre Dame, where she is studying a collection of Bab edh-Dhraremains housed in the Department of Anthropologyat the annual meeting of the American Association of Physical Anthropologists.

Her research also will be featured at the fifth annual Notre Dame Department of Anthropology Undergraduate Research Exposition in April.