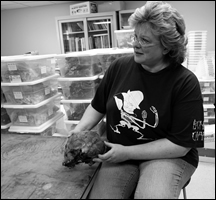 They arrived at Notre Dame packed in 600 beer cartons and Xerox boxesthe charred and broken skeletal remains of some 200 inhabitants of one of the worlds earliest walled cities, settled more than 3,000 years ago in southernJordanon the southeastern shore of theDead Sea.

The bones, housed and studied atKansasStateUniversityfor the past 20 years and transferred to Notre Dames anthropology department a year and a half ago, were acquired by anthropologist Susan Sheridan through a series of professional connections. Undergraduate anthropology students conducted the initial work of washing, numbering and sorting the thousands of bones, preparing them for study.

This is an extraordinary collection. Its one of the first groups weve seen settling down in cities and building walls around themselves,says Sheridan, Nancy ONeill Associate Professor of Anthropology. A specialist in biological anthropology, she is one of the lead researchers for the Dead Sea Plain Projectan ongoing excavation that, for the last 40 years, has investigated the way people lived and died in these settlements.

Wed like to know why they needed to build the wallswhat kind of conflicts they faced that left them with so many injuries and the skeletal remains of so many children,saysSheridanof the burned and broken bones.

In the eastern Mediterranean region, people built the first walled cities during a period archaeologists call the Early Bronze Age (EBA, 3500-2000 B.C.). In the EBA on the Dead Sea Plain, people began burying their dead in extensive cemeteries, and eventually, built cities next to these cemeteries. One settlement, called Bab edh-Dhra, established a way of life that we read about in the Bible, and Notre Dames newest skeletal collection was excavated from a cemetery near this city.

By analyzing the bones of these 230 people of Bab edh-Dhra, Sheridan and a group of inquisitive students will piece together biological clues and identify what the inhabitants ate, what diseases they suffered from, what kind of work they performed, and perhaps, what violence befell them.

Since our biological analysis of the remains is done in concert with the written and material culture discoveries of the Bab edh-Dhra site, we are able to make connections between cultural practices and the biological effects they had on people,according to Sheridan.Its impossible to divorce culture from biology.

Archeologists from around the world have been excavating the Bab edh-Dhra site since the 1960s in different waves, focusing primarily on the artifacts of this early culture. The current Dead Sea Plain excavation project, directed by Notre Dame archeologist Meredith Chesson, involves scholars from Notre Dame, Yale, the Smithsonian Institution and the Carnegie Institute, who have unearthed thousands of pottery vessels, metal weapons, stone bowls and other objects that offer insight into how the society was divided into different groupssimilar to modern day economic classes. These artifacts, together with written historical sources like the Hebrew Bible, will contextualizeSheridans biological findings.

The concentration in the Middle East has been on artifacts, but American archeology takes a more holistic approachand with this broader view, we hope, within the next five years, to gain an understanding of just who these people are, and how they lived and how they died.