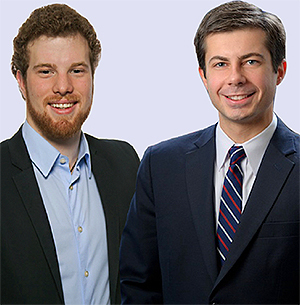 Siegfried Hall, a men’s residential hall on the campus of the University of Notre Dame, is sponsoring “Town and Gown: A Conversation with Mayor Pete Buttigieg and Student Body President Alex Coccia” at 7 p.m. April 11 (Thursday) in the Hesburgh Library’s Carey Auditorium.

The event is part of the Siegfried Symposium, an effort started this year by residents of Siegfried Hall to host accomplished figures in the University and greater South Bend communities in an informal conversation. The third event of the symposium, “Town and Gown” is free and open to the public.

The program will bring together Pete Buttigieg, mayor of South Bend, and Student Body President Alex Coccia to discuss relations between the city and the University, opportunities that might be explored and issues that should be resolved. The discussion will be moderated by Robert Schmuhl, the Walter H. Annenberg-Edmund P. Joyce Chair in American Studies and Journalism and the director of the John W. Gallivan Program in Journalism, Ethics and Democracy.

The forum will be organized into 40 minutes of moderated conversation followed by 20 minutes of questions from the audience.

Buttigieg, a Harvard University alumnus and Rhodes Scholar, was sworn into office in 2012 as the youngest mayor of a U.S. city with at least 100,000 residents. He is the co-founder of the Democratic Renaissance Project and a fellow at the Truman National Security Project.

Coccia, a native of Columbus, Ohio, is a junior majoring in Africana Studies and peace studies. He is a founding member of the 4-to-5 Movement and co-president of the Progressive Student Alliance.

Schmuhl is the author or editor of 11 books, including “Statecraft and Stagecraft: American Political Life in the Age of Personality.”

The Siegfried Symposium has previously hosted such speakers as Rev. John I. Jenkins, C.S.C., president of Notre Dame; and Jimmy Gurulé, professor of law at Notre Dame and former assistant U.S. Attorney General and undersecretary at the U.S. Treasury.