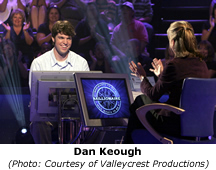 Dan Keough, a University of Notre Dame senior fromChattanooga,Tenn., will be a contestant on the syndicated television game showWho Wants to be a Millionaire.The episode will air locally at12:30 p.m.Monday (Sept. 18) on WNDU-TV (Channel 16).

Hosted by Meredith Vieira (who recently replaced Katie Couric as anchor of NBCsToday),Millionaireoffers large cash prizes for contestants who correctly answer a series of increasingly difficult, multiple-choice questions.If the contestant is unsure of the answer to a question, he or she can use one or more “lifelines,” including asking the audience or phoning a friend for help.The shows top prize is $1 million.

Keough, a marketing and film double major, spent last spring studying abroad inLondon, where he worked as an intern on the new Harry Potter movie.It was during his summer internship in the merchandise department of New Line Cinema inNew York City, that he decided to join a co-worker auditioning forMillionaire.

About a week after the audition, I received a call from one of the producers who told me I would be on the show in about three weeks,Keough said.I spent that time studying all kinds of random stuff and reading online transcripts of old Millionaireepisodes.The day of the taping I was so petrified my brain just went into autopilot.I don’t remember very much of it, to be honest. It was definitely the scariest experience of my life, in a good way.

Although he cannot reveal specifics of the show until after it airs, Keough says if he wins big onMillionaire,he will pay off student loans and pay for his siblingseducation.