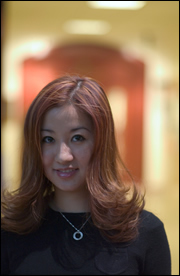 Resisting simple classification,Chinas government in the 21st century melds autocratic, post-socialist and capitalist elements into a hybrid system controlled by the Communist Party of China. But the mere mention of a word likecommuniststill conjures up a host of images in theUnited States.

In the States, it [the Chinese government] seems like such a threat,said Notre Dame senior Willa Qian, who in the summer of 2002 became the first foreigner to intern with the Chinese government inBeijing, the countrys capital.In certain classes I take here in Notre Dame . . . when they talk aboutChina. . . they say Oh my gosh, the government, its just so scary.

But Qian, a business major with a minor in Asian studies, says she never felt discriminated against, let alone fearful, during her three months working for the Beijing Comprehensive Investment Company (BCIC). That doesnt mean, however, that securing the position was like applying for a typical summer internship, even with the help of Yuming Meng, a 1999 graduate of Notre Dames Mendoza College of Business and vice president of BCIC.

For me to intern for them,Qian said,Im their responsibility as an American citizen. If anything happened – the [Chinese] government was pretty scared about it. But [because] they were undergoing globalization with the Olympics, he [Meng] got approved by the mayor ofBeijing. And in the Communist Party, you have [a hierarchy], and he had to get approved all the way to the top.

Qians presence was significant enough for China Daily, a state-run newspaper with the largest circulation of any English-language newspaper inChina, to feature her in a story titledState firm hires foreign intern.Despite thatforeignerstatus, though, her job did allow for something of a homecoming.

My Chinese improved a lot,said Qian, a naturalizedU.S.citizen who is a native ofWuhan,China. Since she came to theUnited Stateswhen she was 9, Qian said her Chinesewasnt so good that I knew . . . all the complicated words; I couldnt articulate myself in Chinese even if I wanted to back then.

So the communication took awhile. But . . . a lot of people [inChina] know English. If I absolutely could not comprehend something, theyd find a way for me to know what it meant. And people were really friendly, they were really nice; people in the office made a point to show me around town.

Qian spent most of her time working for Tianchuang Property, the real estate branch of BCIC, translating company literature into English and teaching English-language seminars. In return, she learned aspects of the Chinese real estate business that would seem completely foreign to an American. She says, for instance, that there are different types of housing for foreigners and native Chinese, and one can usually only purchase housing thats designated for his or her group. The biggest difference in her eyes betweenChinaand theUnited States, however, is simply the rituals that govern the way the Chinese conduct business, from the necessity of standing up and offering both hands to receive a business card to the accepted practice of answering a cell phone during a meeting.

A lot of [what] Yuming told me was: Half of it is you providing us with what we need to learn from you, like the Americanized way of doing certain things, the translations, the language classes. But the other half that we want you to take back [is] how we do things here, to have you learn this way and you can bring it back with you and present it to other people.

Before working for BCIC, Qian already was an accomplished student entrepreneur. In the spring of 2002, she and Notre Dame classmate Frank Larkin won the award for best undergraduate plan in the McCloskey Notre Dame Business Plan Competition by pitching theirWireless Waitersystem. In 2003, they presented the system at the first Collegiate EntrepreneursOrganization (CEO) Elevator Pitch Competition, taking third in the national contest. That same year, Qian and Larkin were recognized as the best student leaders by CEO.

The Wireless Waiter computerizes nearly all aspects of the restaurant-going experience, save the actual delivery of food to the table. While working for BCIC, Qian presented the idea to the companys technology investment firm. That firm signed a licensing contract with Qian to distribute the product, which is still in development, and the Wireless Waiter may be in use at the 2008 Olympics inBeijing.

Qian, however, would like to sell her rights to the system and focus on the next step in her career: law school. Her interest in this area was piqued by her time inChina, where, she says,the thought of suing someone is non-existent.

But despite a different legal system administered by a government with power to censor its people – particularly political dissidents – Qian feelsChinahas a lot in common with the country often cast as its opposite.

I thinkAmericais a lot likeChina,she said,just because here [in theUnited States] a lot of things are done, just not said. If youre in a meeting, or you have an interview for a job, they judge you automatically, just like they do inChina, but inChinathey do it . . . in front of your face.

According to Qian, even beyond the boardroom, the differences are not as large as people might expect. The Chinese government might ban the sale of a book like Wei HuisShanghai Baby,which is promoted to American audiences as so controversial that its been burned inChina, but that doesnt mean anyone, including a police officer, would give a second thought to seeing someone read it in public.