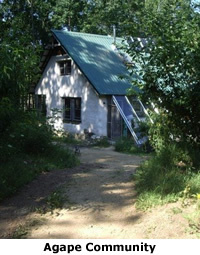 Chopping wood, hauling water, lifting manure, community prayer three times a day:This is not your typical summer internship.Casey Stanton, a senior in Notre Dames Program of Liberal Studies with a peace studies minor, spent this past summer in ruralMassachusetts, waking up early each morning to complete these daily tasks.

Stantoninterned at Agape Community, a small residential community in Ware, Mass.Founded in 1982 in the city ofBrockton, the project was established to bring awareness to non-violence and the idea of simplistic living.

We took vows when we became married to live in a community and to live non-violence from a Christian perspective, to live in voluntary simplicity, and to live the Gospel in our daily life, not just to squeeze it in on the side,said Brayton Shanley, one of the communitys founders.

And that is just whatStantongot to do.She lived, worked and prayed with the Shanley family, other interns, and numerous retreatants and visitors.Agape consists of two homes – the Francis House and St. Brigid House, which is a straw bale building that has solar energy, a compost toilet, and wood cooking and heating stoves.The 32-acre compound includes an organic garden, which provides food to the residents of Agape and the surrounding community.

Each days ordinary tasks included working in the garden, maintaining the grounds, studying non-violence, and praying as a community.

“The mundane and simple, that’s so much of what life is; yet somehow praying together allows the stuff of every day to be transformed,”Stantonsaid.

Such close proximity to, and the dependence on, nature enhancedStantons experience at Agape.

I grew up in the suburbs, never been out in the country,she said.All of the sudden Im out in the dirt shoveling manure.Toads were singing at night, crazy bugs flying everywhere.

For me, it has become a very important aspect of what it means to live out my faith in the world and a need to connect back to my natural environment and not necessarily this conditioned environment that weve brought up around us.

At one point over the summer, the community engaged in a three-day energy fast.Shutting off all electricity, they wanted to draw attention to the use of fossil fuels in everyday life.

At night, we had candles, and it was hard work when we needed water,Stantonsaid.The pump at the Brigid house was run off solar power, so we had to haul water and couldnt flush the toilets.

The energy fast took place at the beginning of the conflict inIsraelandLebanon, adding another dimension to the endeavor.

I know one aspect for me, because life at Agape is so very much connected to spirituality, there was an intentionality in the energy fast – were choosing to do this but there are a lot of people who dont have this choice,Stantonsaid.So many people in parts of the world, especially in conflict zones, but not exclusively, have to go without these things we take for granted everyday.There are deeper spiritual ramifications for all this, and now is the time to reassess our lifestyles and try to move forward while we still have oil.

Its like summer camp, but richer,she said.You live in a strong intellectual community that challenges your ideas and helps you in the process of clarification of thought, which is so important as a 20-year-old.It is a place to discern what being Catholic is and what it means to me, and it is a safe place to build that spiritual wisdom and intellectual understanding to then go out in the world.

AndStantonplans to take her lessons learned at Agape and incorporate them in her studies here at Notre Dame.

My thesis has come out of a lot of the actual experiences of Agape, and I am reinvigorated back at school to get down and dirty to do the hard academic work,she said.

After a summer at Agape,Stantons thirst has been quenched and she is prepared to go out in the world to help satiate the thirst of others.