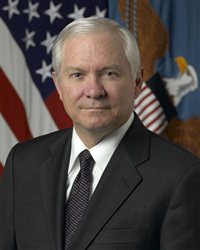 U.S. Secretary of Defense Robert M. Gates will be the principal speaker and recipient of an honorary degree at the University of Notre Dame’s 166th University Commencement Ceremony on May 22 (Sunday) at Notre Dame Stadium.

“The contributions Dr. Gates has made in service to our nation and to higher education are many and significant,” said Rev. John I. Jenkins, C.S.C., Notre Dame’s president. “I am so pleased that he has accepted our invitation and look forward to welcoming him to our campus. I am sure his perspectives on our nation and world will be of considerable interest to Notre Dame’s graduating Class of 2011.”

Nominated by President George W. Bush, Gates was confirmed by the Senate and sworn in Dec. 18, 2006, as the 22nd secretary of defense. He was asked to continue in office by President Barack Obama, making him the only defense secretary in U.S. history to be asked to remain by a newly elected president.

Gates served as president of Texas A&M University, the nation’s seventh largest university, for the four years prior to his current position and was interim dean of the George Bush School of Government and Public Service at Texas A&M from 1999 to 2001.

As A&M’s president, he made significant progress in four key areas of the university’s “Vision 2020” initiative – student diversity, increasing the size of the faculty, building new academic facilities and enriching the undergraduate and graduate education experience. During his tenure, Gates encouraged the addition of 440 new faculty positions and a $300 million campus construction program, and the university saw dramatic increases in minority enrollment.

A native of Kansas, Gates earned his bachelor’s degree from the College of William and Mary, his master’s degree in history from Indiana University, and his doctorate in Russian and Soviet history from Georgetown University.

Gates joined the Central Intelligence Agency in 1966 and spent nearly 27 years as an intelligence professional, including nearly nine years at the National Security Council.

Gates has been awarded the National Security Medal and the Presidential Citizens Medal. He twice received the National Intelligence Distinguished Service Medal and three times received the CIA’s highest award, the Distinguished Intelligence Medal. His memoir, “From the Shadows: The Ultimate Insider’s Story of Five Presidents and How They Won the Cold War,” was published in 1996.

Gates has served on the board of directors and executive committee of the American Council on Education, the board of directors of the National Association of State Universities and Land-Grant Colleges, and the national executive board of the Boy Scouts of America. He also has been president of the National Eagle Scout Association.
Gates was commissioned a second lieutenant in the U.S. Air Force in 1967 and served as an intelligence officer at Whiteman Air Force Base in Missouri.

After being held in the Joyce Center for more than 40 years, Notre Dame’s University Commencement Ceremony was moved to Notre Dame Stadium last year. It will begin at 9 a.m.