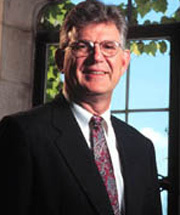 Notre Dame Law School Professor James Seckinger will join a small international group of trial advocacy teachers in Freetown, Sierra Leone, April 16 to 23 to train the prosecuting team for that country’s upcoming war crimes trial.p. The group will offer general training on trial advocacy and will concentrate on skillful delivery of opening and closing statements and direct examination techniques.p. The West African nation of Sierra Leone endured a decade-long civil war in the 1990s. In the fighting between government militias and the rebels of the Revolutionary United Front (RUF), some 50,000 people were killed, many thousands more were mutilated, one-third of the country’s population was displaced, and both sides were credibly accused of inflicting extreme brutality on the civilian population.p. A Special Court was jointly established by the United Nations and the government of Sierra Leone with a mandate to prosecute those most responsible for violations of international humanitarian law and Sierra Leonean law during the war years. Top militia leaders from both sides will be prosecuted.p. Seckinger has been a member of the Law School faculty since 1974. One of the nation’s most celebrated trial advocacy teachers, he is a member of the National Institute for Trial Advocacy, which is headquartered at Notre Dame, and served as its director from 1979 until 1994. His teaching and scholarship concern deposition techniques, evidence, professional responsibility, and trial advocacy. He frequently conducts workshops on trial advocacy and deposition techniques for leading American law firms and international legal organizations.p. Contact: Carol Jambor-Smith, director of external relations of Notre Dame Law School, at 574-631-6891 or cjambors@nd.edu